The Antelope Wife: A Novel (Paperback) 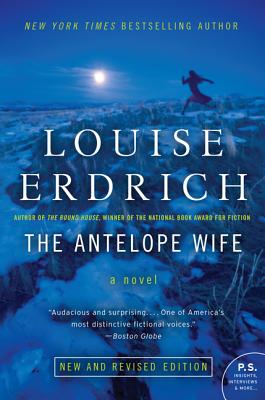 By Louise Erdrich
Email or call for price
Out of Print

“A fiercely imagined tale of love and loss, a story that manages to transform tragedy into comic redemption, sorrow into heroic survival.”—New York Times

A New York Times bestselling author, a Pulitzer Prize finalist, and winner of the National Book Award, Louise Erdrich is a renowned chronicler of life and love, mystery and magic, within the Native American community. A hauntingly beautiful story of a mysterious woman who enters the lives of two families and changes them forever, Erdrich’s classic novel, The Antelope Wife, has enthralled readers for more than a decade with its powerful themes of fate and ancestry, tragedy and salvation. Now the acclaimed author of The Plague of Doves and The Round House has radically revised this already masterful work, adding a new richness to the characters and story while bringing its major themes into sharper focus, as it ingeniously illuminates the effect of history on families and cultures, Ojibwe and white.

Louise Erdrich is the author of fifteen novels as well as volumes of poetry, children’s books, short stories, and a memoir of early motherhood. Her novel The Round House won the National Book Award for Fiction. The Plague of Doves won the Anisfield-Wolf Book Award and was a finalist for the Pulitzer Prize, and her debut novel, Love Medicine, was the winner of the National Book Critics Circle Award. Erdrich has received the Library of Congress Prize in American Fiction, the prestigious PEN/Saul Bellow Award for Achievement in American Fiction, and the Dayton Literary Peace Prize. She lives in Minnesota with her daughters and is the owner of Birchbark Books, a small independent bookstore.