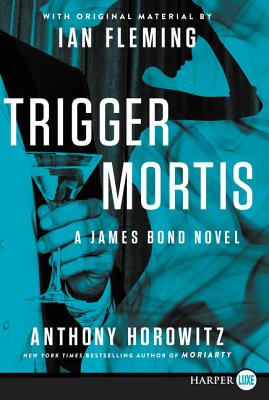 Blockbuster author Anthony Horowitz delivers a riveting and stylish take on literary legend James Bond (authorized by the Ian Fleming Estate) with a story that unfolds in the 1950s—and is the first new Bond novel to feature recently discovered original material by Ian Fleming.

It’s 1957 and James Bond (agent 007) has only just survived his showdown with Auric Goldfinger at Fort Knox. By his side is Pussy Galore, who was with him at the end. Unknown to either of them, the USSR and the West are in a deadly struggle for technological superiority. And SMERSH is back.

The Soviet counter-intelligence agency plans to sabotage a Grand Prix race at the most dangerous track in Europe. But it’s Bond who finds himself in the driving seat and events take an unexpected turn when he observes a suspicious meeting between SMERSH’s driver and a sinister Korean millionaire, Jai Seong Sin.

Soon Bond is pitched into an entirely different race uncovering a plan that could bring the West to its knees.

This is James Bond as Fleming imagined him.

ANTHONY HOROWITZ is the author of the US bestselling Magpie Murders and The Word is Murder, and one of the most prolific and successful writers in the English language; he may have committed more (fictional) murders than any other living author. His novel Trigger Mortis features original material from Ian Fleming. His most recent Sherlock Holmes novel, Moriarty, is a reader favorite; and his bestselling Alex Rider series for young adults has sold more than 19 million copies worldwide. As a TV screenwriter, he created both Midsomer Murders and the BAFTA-winning Foyle’s War on PBS. Horowitz regularly contributes to a wide variety of national newspapers and magazines, and in January 2014 was awarded an OBE.

“As Bond-villain plots go, this is a clever one…. There are more than enough pleasures for even the strictest Bond aficionado in Trigger Mortis.… The book barely puts a foot wrong.… I especially liked the way the book starts with a sentence that Fleming himself might have written: ‘It was that moment in the day when the world has had enough.’ We all know moments like that, and we all know that the thing to do when such moments linger too long is to pick up a James Bond book.”
— Wall Street Journal

“Great fun…[for] readers who can’t get enough of James Bond at his coolest and suave-est.”
— Seattle Times

“Horowitz…delivers the tersely precise prose that makes Bond so compelling, but more than that, he also supplies touches of Fleming’s cruel poetry…. A brisk and effective ride.”
— The Guardian

“Horowitz has written a humdinger of a Bond story, so cunningly crafted and thrillingly paced that 007’s creator would have been happy to have owned it…from his brilliant first chapter on, Horowitz is a pitch-perfect mimic of the Fleming one-line punch….He even gets the clichés spot on.”
— Simon Schama, Financial Times

“The heart of any good thriller is the plot, and…Horowitz doesn’t disappoint. The action moves with high velocity…. Also stays true to the Bond of Fleming’s books.”
— New York Times Book Review

“As Bond-villain plots go, this is a clever one…. There are more than enough pleasures for even the strictest Bond aficionado in Trigger Mortis.… The book barely puts a foot wrong...”
— Wall Street Journal

“In Horowitz’s expert and mischievous hands, Bond hasn’t been scolded into becoming all things to all people. Instead, he’s still Bond, James Bond, license to do what he damn well likes.… Brilliant.… Thank goodness Mr. Horowitz has delivered us a great new story.”
— Matthew Dunn, FoxNews.com

“If Anthony Horowitz’s byline weren’t on the cover, readers could bring themselves to believe that the new James Bond thriller actually came from the late Ian Fleming’s typewriter. Trigger Mortis fits seamlessly among the original Cold War-era gems…. Bona fide Bond in every way.”
— Fort Worth Star-Telegram

“…promises to be the best Fleming homage yet.”
— Publishers Weekly

“It’s quickly apparent that Horowitz is doing something both clever and audacious.... Very much of its period.... A clever and enjoyable pastiche, which manages to press many of the buttons that were the purview of 007’s creator.... There will surely be an appetite for more outings à la Horowitz.”
— The Independent (UK)