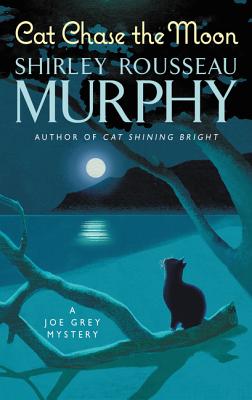 Joe Grey and his tabby lady, Dulcie, are frantic when Courtney, their teen kitten, goes missing. Aided by their two- and four-legged friends, they hit the streets of Molena Point in search of their calico girl.

Courtney has no idea that everyone is looking for her. Kidnapped, locked in a luxurious upstairs apartment above the local antiques shop, she begins to enjoy her first lone adventure as the shop’s owner, Ulrich Seaver, pampers and flatters her. Sheltered by her parents, her brothers, and her kind human companions, innocent Courtney thrills at the glamorous future Seaver paints for her—until his sly moves awaken a sharp fear in the young calico…

Joe Grey, intent on finding Courtney, neglects his search for the attacker who left a beaten woman near death in an open grave. As the clues to that crime surface, as Joe passes information to Molena Point PD, he finds himself entwined in a larger tangle of robbery, death, and unexpected relationships that challenge even the wily gray tomcat. Can the fleet-footed feline unravel the mysteries before it is too late?

Shirley Rousseau Murphy is the author of twenty mysteries in the Joe Grey series, for which she has won the Cat Writers’ Association Muse Medallion nine years running, and has received ten national Cat Writers’ Association Awards for best novel of the year. She is also a noted children’s book author, and has received five Council of Authors and Journalists Awards. She lives in Carmel, California, where she serves as full-time household help to two demanding feline ladies.

Praise for Cat Shining Bright: “The book’s charm lies in the clever cats and the people they care about. This is a must read for those who enjoy the feline side of sleuthing.”
— Romantic Times BOOKclub

Praise for Cat In the Dark: “Joe Grey and his ladyfriend Dulcie aren’t just your ordinary feline detectives. Murphy’s raised the stakes of the feline sleuth genre.”
— Kirkus Reviews

Praise for Cat On the Edge: “A delicious romp . . . of murder, revenge, and jealousy, interlaced with fantasy. This is excellent reading, whether you believe or not. Not to be missed!”
— Armchair Detective

Praise for Cat Under the Fire: “Magical whimsy and deft writing.”
— Cats Magazine

“This is delightful entertainment. It would be a true cat-tastrophe if you let it pass you by.”
— Todd David Schwartz, CBS Radio, Four Stars (Highest Rating) on the Joe Grey Series

“[W]ith an uncanny understanding of a cat’s behavior and personality quirks, Murphy has created a series of supense yarns that not only capture the feline ‘attitude’ but offer a satisfying read.”
— Californian on CAT BREAKING FREE

“A heartwarming and satisfying tale.”
— Booklist on CAT COMING HOME