The Night Visitors: A Novel (Paperback) 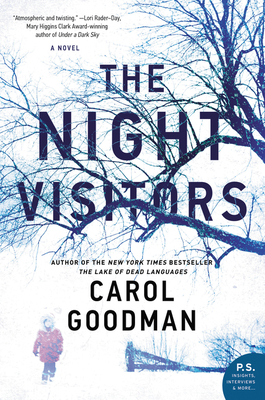 The latest thriller from the internationally bestselling author of The Lake of Dead Languages and The Other Mother, a story of mistaken identities and missed chances, forgiveness, and vengeance.

ALICE gets off a bus in the middle of a snowstorm in Delphi, NY. She is fleeing an abusive relationship and desperate to protect...

OREN, ten years old, a major Star Wars fan and wise beyond his years. Though Alice is wary, Oren bonds nearly instantly with...

MATTIE, a social worker in her fifties who lives in an enormous run-down house in the middle of the woods. Mattie lives alone and is always available, and so she is the person the hotline always calls when they need a late-night pickup. And although according to protocol Mattie should take Alice and Oren to a local shelter, instead she brings them home for the night. She has plenty of room, she says. What she doesn't say is that Oren reminds her of her little brother, who died thirty years ago at the age of ten.

But Mattie isn't the only one withholding elements of the truth. Alice is keeping her own secrets. And as the snowstorm worsens around them, each woman's past will prove itself unburied, stirring up threats both within and without.

Carol Goodman is the critically acclaimed author of fourteen novels, including The Lake of Dead Languages and The Seduction of Water, which won the 2003 Hammett Prize. Her books have been translated into sixteen languages. She lives in the Hudson Valley with her family, and teaches writing and literature at the New School and SUNY New Paltz.

“Brilliantly conceived and executed...Goodman provides readers with that delicious frisson that comes from not knowing what will happen next.”
— Publishers Weekly (starred review)

“You can always call upon Carol Goodman when you need an atmospheric and twisting tale. Full of half-truths and vengeful ghosts of the past, The Night Visitors will inspire readers to linger long into the night.”
— Lori Rader-Day, Mary Higgins Clark Award-winning author of Under a Dark Sky

“Well-defined characters, including the marvelous Sister Martine, who runs a sanctuary for women in trouble; slowly building suspense; and an ending that pulls out all the stops make for a really good wintry read that’s reminiscent of Mary Stewart and Victoria Holt. Best by firelight.”
— Booklist