You Will Never Be Found: A Novel (The High Coast Series #2) (Hardcover) 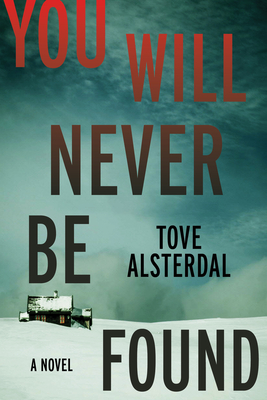 Detective Eira Sjodin, introduced in the electrifying Swedish crime thriller We Know You Remember, races to solve a disappearance that hits chillingly close to home in the second book in the High Coast series, hailed by People as “Nordic noir at its best.”

In the small mining town of Malmberget, north of the Arctic Circle, residents and their houses are being relocated. As the mine that built the town slowly swallows it street by street, building by building, the memories of the community have collapsed into the huge pit they call “the hole.” Only a few stubborn souls cling to their homes, refusing to leave. When two workers making their final preparations hear a sound coming from a basement, they break a cellar window and find a terrified man curled up in a corner.

In Ådalen, 700 kilometers away, police officer Eira Sjödin is investigating the disappearance of a man reported missing by his ex-wife. Eira and her colleagues search his apartment, contact his friends and relatives, and query local hospitals, but the man has vanished without a trace.

Eira knows the pain of loss—she mourns for her mother, whose mind has been stolen by dementia. To escape her loneliness and her memories, Eira loses herself in a casual affair. But she’s wholly unprepared when her feelings deepen for GG, who is twenty years her senior–and her boss.

When the diligent GG doesn’t show up for work two days in a row, Eira and her colleagues quickly realize that something is wrong—their boss has gone missing. In the dramatic second installment of the High Coast Series, Eira Sjödin finds herself at the mercy of an elusive perpetrator—and of a love she can no longer deny.

Tove Alsterdal burst upon the Swedish book scene in 2009 with The Forgotten Dead and is the author of five critically acclaimed stand-alone novels. We Know You Remember, which was named Swedish Crime Novel of the Year and was shortlisted for the country’s Book of the Year Award, marks her American debut.

“Beautifully elegiac and intricately plotted, this is Nordic noir at its best.” — People Magazine, Best Books of Fall Award

“Strong local color, convincing characters, and a twisty plot make this a standout. This is Swedish noir at its murky best.” — Publishers Weekly, starred review

“This is a world-class Scandinavian mystery, one that will be mentioned in the same breath with Smilla’s Sense of Snow, The Redbreast or the Milennium trilogy…. I predict that it will be one of the most talked-about suspense novels of the year.”  — BookPage, starred review

“Alsterdal plots enough twists to keep the police procedural interesting and writes a great woman protagonist; fans of international mystery will be happy to discover her.” — Library Journal

“A cat-and-mouse game that promises to be full of surprises, as well as thoughtful considerations of grief, guilt, and memory.” — LitHub’s Crimereads

“Riveting.... The plot structure of this memorable work is brilliantly conceived and executed, and the development of an array of fascinating characters is impressive. As a matter of fact, it is as much a profound psychological study as it is a clever police procedural ... A superb procedural and an acutely revelatory reading experience.”  — Bookreporter