A Secret About a Secret: A novel (Hardcover) 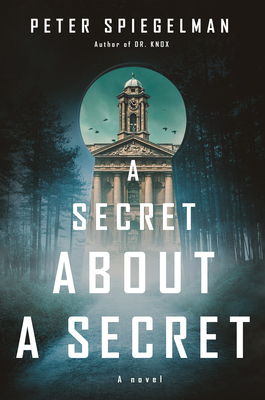 A hypnotic literary mystery thriller about a murder at a secluded research facility and the secrets that it exposes. • "Cyber thievery, lust, corporate espionage, and a host of deleterious secrets comprise the chords of this sweeping, riveting symphony.  A bold and original thriller by a masterful storyteller.” —Elizabeth Brundage, author of The Vanishing Point


Looming high above the cliffside along a remote coastline, Ondstrand House is the headquarters of the shadowy biotech firm Ondstrand Biologic. When the body of the organization’s most gifted young scientist, Allegra Stans, is discovered in a walk-in refrigerator—her neck has been broken—Agent Myles is called in to investigate. Myles works for Standard Division, the most feared element of a vast state security apparatus, and he’s been dispatched to the brooding manor, a massive stone campus that once housed a notorious boarding school, to do what Standard Division agents do best—complete the task at hand.

As his investigation proceeds, Myles discovers that “gifted scientist” is only one thread in the complicated fabric of Allegra’s life. There are darker strands as well—of ambition, manipulation, and bitter grievance—all woven into a pattern of secrets, each presenting a reasonable motive for murder. It appears everyone has something to hide, including Allegra’s colleagues, lovers, and former lovers—even the very halls of Ondstrand House itself.

Questions continue to pile up: What interest does Standard Division, an organization best known for intelligence gathering and clandestine international operations, have in this seemingly straightforward case? Could the killing have anything to do with the sprawling estate’s sordid past? And what, exactly, is this research facility researching? Before long, another murder is discovered, and Myles finds himself an increasingly unwelcome presence in an ever more hostile landscape with few allies and fewer answers.

PETER SPIEGELMAN is the author of Black Maps, Death’s Little Helpers, Red Cat, Thick as Thieves, and Dr. Knox. Prior to his career as a writer, Spiegelman spent nearly twenty years in the financial services and software industries. He lives in New York City.

"Peter Spiegelman has always been about intricate plotting and his latest ... is no different. Only this time, he’s added another level."
—Northwest Indiana Times

"Spiegelman is a top-notch storyteller, and his latest will appeal equally to those who enjoy mainstream procedurals and to genre-blending readers who relish crime novels set in the future."
—Booklist

"In his astonishing new novel, set in an ambiguous future, Peter Spiegelman unpacks a murder at an elite research facility with an ominous history, navigating an elusive frontier of scientific innovation where intellectual property is its most coveted currency. Cyber thievery, lust, corporate espionage, and a host of deleterious secrets comprise the chords of this sweeping, riveting symphony.  A bold and original thriller by a masterful storyteller.
—Elizabeth Brundage, author of The Vanishing Point

"In A Secret About a Secret, Peter Spiegelman has written a cool, stylish, state-of-the-art thriller that suits our moment perfectly. Fans of Scandinavian crime shows and well-crafted American mystery fiction will come away more than satisfied. Highly recommended."
—Peter Blauner, Edgar Award winner and New York Times bestselling author of The Intruder and Sunrise Highway

"Peter Spiegelman has an extraordinary ability to conjure vivid characters and places with a few perfectly-chosen words. In A Secret About a Secret, he puts that skill to the service of creating a world that is not quite ours (not yet anyway). I couldn't put this book down and was rooting for Myles, its narrator, even while I was a tiny bit horrified at his role in a world that itself is more than a tiny bit horrifying."
—SJ Rozan, bestselling author of Family Business