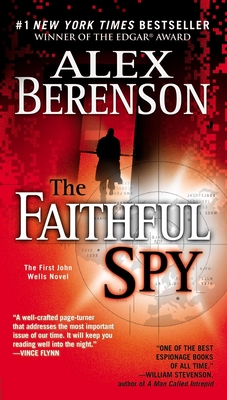 Drawing from his experience as a correspondent in Iraq, Alex Berenson exploded onto the thriller scene with this perfectly crafted, highly-acclaimed debut novel—“a timely reminder of the extremely precarious way we live now” (The Washington Post).

Years ago, John Wells was an all-American boy from Montana. Now, he is roaming the mountains of Pakistan as a member of al Qaeda.

After a decade away from home, he despises the United States for its decadence. He hates America’s shallow, mindless culture of vice and violence. He is a devout Muslim. He is a brave warrior for Allah.

He is a CIA operative. And he is coming home…

As a reporter for The New York Times, Alex Berenson has covered topics ranging from the occupation of Iraq to the flooding of New Orleans to the financial crimes of Bernie Madoff. He is the #1 New York Times bestselling author of the John Wells series, including The Faithful Spy, which won winner of the 2007 Edgar Award. He lives in New York City.

“A well-crafted page-turner that addresses the most important issue of our time. It will keep you reading well into the night.”—Vince Flynn