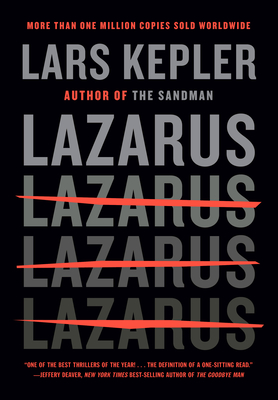 “One of the best thrillers of the year! Kepler treats us readers to a nonstop roller coaster of suspense, taking us deep into the hearts and minds of perfectly realized characters. And, oh, what a villain! Lazarus is the definition of a one-sitting read!” —Jeffery Deaver, New York Times best-selling author of The Goodbye Man

Sometimes the past won't stay buried.

All across Europe, the most ruthless criminals are suffering gruesome deaths. At first, it seems coincidental that their underworld affiliations are finally catching up to them. But when two of the victims are found to have disturbing connections to Detective Joona Linna, it becomes clear that there’s a single killer at work. Still, police are reluctant to launch an investigation. If a mysterious vigilante is making their jobs easier, why stand in his way? Joona, however, is convinced this is no
would-be hero. These deaths serve a much darker purpose.

Desperate for help, Joona turns to Saga Bauer. If his hunch is correct, she’s one of the few people who stands a chance at bringing this criminal mastermind down. But Saga is fighting her own demons—and the killer knows just how to use them to his advantage. He continues to strike with impunity, and no one, it seems, is safe. When the killer begins targeting those closest to Saga and Joona, it appears more and more likely that Joona has been right all along, and that tracking down the person responsible will force him to confront a ghost from his past . . . the most terrifying villain he’s ever had to face.

LARS KEPLER is the pseudonym of the critically acclaimed husband-and-wife team Alexandra Coelho Ahndoril and Alexander Ahndoril. Their novels have sold more than fifteen million copies in forty languages. The Ahndorils were both established writers before they adopted the pen name Lars Kepler and have each published several acclaimed novels. They live in Stockholm, Sweden. Translated by Neil Smith.

“Pulse-pounding. . . . Truly terrifying. . . . Lazarus is not for the faint of heart. . . . If you know you love dark and twisted, sometimes painful, and sometimes disturbing crime fiction, this book will hold you hostage. . . . For fans of Kepler, this is a ride you will not forget.”
—Marla Warren, The Nerd Daily

“Lazarus is a thriller par excellence, though it’s advisable to read it in small increments, for the accumulation of too much horror at one time will definitely lead to sleepless nights, continuous checking of locks, and an increase in one’s lighting bill.”
—Toni V. Sweeney, The New York Journal of Books

“The Kepler duo are unmatched in their ability to crank up the tension, murder by murder, to an almost unbearable degree.”
—Lisa Henricksson, Air Mail

“Tense and remarkably bloody from start to finish. . . . The Lars Kepler team really seems to have hit their stride.”
—Steven Whitton, The Anniston Star

“The plot unfolds at an exhilarating pace as the Kepler duo keeps a tight grip on the cat-and-mouse action, a dynamic that reveals itself to be all the more disturbing as the novel progresses.”
—CrimeReads (10 Novels You Should Read This December)

“The perfect creepy, thrilling addition to your winter TBR. Kepler’s books are known for being action-packed, dark, and gory, and in Lazarus, they up the ante. . . . Fans of Kepler’s superb serial killer thriller The Sandman will fall instantly in love with their newest release. Lazarus is a bloody, page-turning, action-packed serial killer thriller perfect for a weekend binge-read.”
—Crime by the Book (Most-Anticipated December 2020 Crime Fiction Releases)

“From the opening line, Kepler sets an ominous tone, cold and heavy with a taught sense of anticipation that will keep readers flying through the pages despite their fear of what might come next. Absolutely terrifying and beautifully written. I'm a fan for life!”
—Tami Hoag, #1 New York Times best-selling author of The Boy

“One of the best thrillers of the year! Kepler treats us readers to a nonstop roller coaster of suspense, taking us deep into the hearts and minds of perfectly realized characters. And, oh, what a villain! Lazarus is the definition of a one-sitting read!”
—Jeffery Deaver, New York Times best-selling author of The Goodbye Man

“Kepler’s characters, particularly Joona Linna, are always drawn sharp and deep, like scalpel cuts. Kepler’s prose unrolls as smoothly as a loop of razor wire. But it’s Kepler’s storytelling that really draws blood. Lazarus is as literate as peak Michael Connelly and as addictive as David Baldacci.”
—A. J. Finn, best-selling author of The Woman in the Window

“Kepler maintains an almost unbearable level of tension throughout and does an outstanding job of making readers fear that anyone could die a horrible death at any time. Fans of serial killer fiction won’t want to miss this one.”
—Publishers Weekly, Starred Review

“Kepler combines explosive action with masterfully developed tension. Readers already on board with this standout series will find a bar-raising entry here, and reassurance that the door is open for Joona’s return. Strongly recommended for fans of Nicci French, Stieg Larsson, and Jussi Adler-Olsen.”
—Booklist, Starred Review