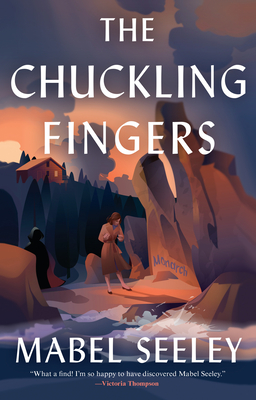 Rediscover one of the great mystery authors of the twentieth century in this Depression-era tale of a wealthy family's dark secrets turned deadly on their secluded lakeside estate.

An urgent note from a friend spurs Ann Gay to visit her recently married cousin, Jacqueline Heaton. Upon her arrival at Fiddler's Fingers, a remote, pine-grown estate on Lake Superior, Ann immediately senses her cousin's fear—someone has been playing increasingly malicious tricks on the Heatons, a proud family of Minnesota lumber tycoons, and worse yet, they seem determined to frame Jacqueline.

Ann quickly resolves to take Jacqueline and her young daughter, Toby, away from the danger. But what began as seemingly trivial pranks—ruined clothes, a burnt bed, a smashed boat—escalates to direct attacks and ultimately murder. Dangerous waters crash against the finger-like rocks on the lakeshore, making a sound like a guttural chuckle, one that seems to mock the murder that took place there—but no one is laughing when everyone on the estate becomes a suspect. Potential motives are revealed as Ann learns more about the Heaton family, and with no chance of anyone leaving Fiddler's Fingers until the killer is caught, Ann realizes that the only way to prove her cousin's innocence is by snaring the murderer herself.

The trap is set; with herself as bait, Ann's door creaks open in the night as a cloaked figure moves silently toward her bed....

One of the most popular American crime writers of the 20th century, Mabel Seeley was known as “The Mistress of Mystery.” Critically acclaimed titles like The Listening House (1938), The Crying Sisters (1939), and the Mystery of the Year awarded The Chuckling Fingers (1941) have placed her stories and characters alongside those of Agatha Christie, Dorthy Sayers, and Sir Arthur Conan Doyle. Amongst her many accolades and awards, Seeley was most proud of her service as the first director of the Mystery Writers of America. Born on March 25, 1903 in Herman, Minnesota, Mabel Seeley is best known for crime novels featuring female detectives who defied the stereotypes of the time as self-reliant and strong-willed Midwestern heroines.

Praise for The Chuckling Fingers

Praise for the novels of Mabel Seeley

“What a find! I’m so happy to have discovered Mabel Seeley. You will love her feisty heroine and the delightful cast of characters who live in the mysterious Listening House. I changed my mind a dozen times about who I thought the killer was, but I was wrong every time!”—Victoria Thompson, USA Today Bestselling Author of Murder on Wall Street on The Listening House

"So packed with weird thrills that it grips from first page to last . . . should take its place as one of the best thrillers of the season."—National Newsagent on The Listening House

“First rate whodunit, with enough of romance to give it a Mary Roberts Rinehart appeal…This is a newcomer in the field—a good 'un.”—Kirkus Reviews, starred review (September, 1938) on The Listening House

“Beautifully told by a writer who is expert at finding horror in commonplace settings. Recommended for highest honors.” —The New Yorker on The Crying Sisters

“The Crying Sisters is the Crime Club selection for this month, and it is an excellent mystery novel of the ‘atmospheric’ type….it holds its interest from the beginning as it rises in crescendo toward climax.”—The New York Times on The Crying Sisters