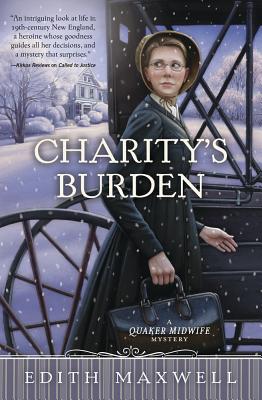 By Edith Maxwell
Email or call for price.
Out of Print

Winner of the 2019 Agatha Award for Best Historical Mystery

Quaker midwife Rose Carroll seeks the true cause of a young mother's death in turn-of-the-century Massachusetts.

The winter of 1889 is harsh in Amesbury, Massachusetts, but it doesn't stop Quaker midwife Rose Carroll from making the rounds to her pregnant and postpartum mothers. When Charity Skells dies from an apparent early miscarriage, Rose wonders about the symptoms that don't match the stated cause of death. She learns that Charity's husband may be up to no good with a young woman whose mother appears to offer prohibited medical procedures. A disgraced physician in town does the same, while Charity's cousin seems to have a nefarious agenda of his own. With several suspects emerging, each with their own possible motives, Rose and police detective Kevin Donovan race against time to solve the case before another innocent life is lost.

Praise for the Quaker Midwife Mysteries:

Not only is it a well-plotted, intelligent mystery, it also shines light on how women were treated--and, in many cases, mistreated--by people they trusted for help in desperate situations. Highly recommended.--Suspense Magazine on Charity's Burden

First of hopefully many more to come, I believe that everyone will definitely enjoy this stand-out book.--Suspense Magazine on Delivering the Truth

The historical setting is redolent and delicious, the townspeople engaging, and the plot a proper puzzle, but it's Rose Carroll--midwife, Quaker, sleuth--who captivates in this irresistible series debut.--Catriona McPherson, award-winning author of the Dandy Gilver series

Rose's] strong personality combined with the author's distinctive voice and vivid writing style transported me instantly to another time and place.--Kathy Lynn Emerson, Malice Domestic 2014 Guest of Honor and author of How to Write Killer Historical Mysteries, Murder in the Queen's Wardrobe, and the Diana Spaulding 1888 Mysteries

A riveting historical mystery featuring a refreshingly different kind of heroine, a Quaker midwife who also solves crimes with wit, intelligence, and gentle grace. It's a page turner. It's a fascinating look at nineteenth-century American faith, culture, and small-town life. And best of all, it's the second of what is sure to be a long and beloved series.--William Martin, New York Times bestselling author of Cape Cod and The Lincoln Letter

An intriguing look at life in 19th-century New England, a heroine whose goodness guides all her decisions, and a mystery that surprises.--Kirkus Reviews

Edith Maxwell is President of the New England chapter of Sisters in Crime and a long-time member of the Society of Friends. She is the author of the Local Foods Mysteries and writes the Country Store Mysteries under the pseudonym Maddie Day.