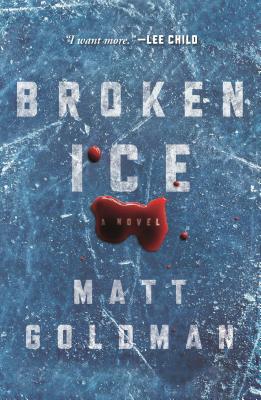 By Matt Goldman
Email or call for special order

In the words of Lee Child on Gone to Dust, “I want more of Nils Shapiro.” Emmy-award winning and New York Times bestselling author Matt Goldman happily obliges by bringing the Minneapolis private detective back for another thrilling, standalone adventure in Broken Ice.

Nils Shapiro has been hired to find missing Linnea Engstrom, a teenager from the small northern hockey town of Warroad, MN. Most of Warroad is in Minneapolis for the state high school hockey tournament, and Linnea never returned from last night’s game. Linnea’s friend Haley Housch is also missing—and soon found dead.

Shot through the arm with an arrow at the Haley Housch crime scene, only the quick work of medical examiner Char Northagen saves Nil’s life.

Nils should be in the hospital recovering from his near fatal injury, but he knows that the clock is ticking. Linnea could be anywhere, and someone doesn’t want her found. Is Linnea a victim, or is she playing a dangerous game? As bodies start piling up, the clues lead Nils and Ellegaard north to Warroad, a small, quiet town with many secrets to hide.

Matt Goldman is a playwright and Emmy Award-winning television writer for Seinfeld, Ellen, and other shows. He brings his signature storytelling abilities and light touch to his Nils Shapiro series, which begins with Gone to Dust. He lives in Minnesota with his wife, two dogs, two cats, and whichever children happen to be around.

"Witty, well-plotted..Nils is a deeply flawed but good-hearted everyman...supported by a cast of wonderfully quirky characters. Readers will look forward to seeing a lot more of Nils and crew." —Publishers Weekly

Praise for Gone to Dust

“A clever mystery that starts with a unique crime scene, mixes in a package of red herrings, and tops off the plot with Nils Shapiro, a private eye who is as interesting as his name.” —Phillip Margolin, New York Timesbestselling author