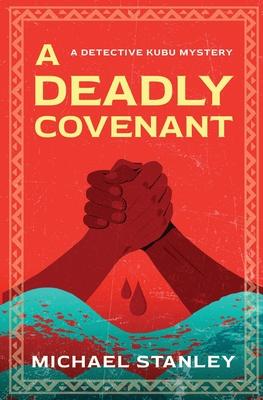 "I found A Deadly Covenant completely intriguing and engrossing, and the Bushman scenes fascinating. Vividly painted scenery, and I can feel the oppressive heat. Talk about Sunshine Noir " - Kwei Quartey, author of the Emma Djan and Darko Dawson mysteries

"The unmatched beauty, spirit, and mystery of Africa never fails to come to life in Michael Stanley's award-winning Botswana-based Detective 'Kubu' series. A Deadly Covenant is an irresistible page-turner and a powerful contribution to the Kubu saga." - Jeffrey Siger, author of the Andreas Kaldis series

This is the eighth book in the Detective Kubu series and the second with him as a young man.

While building a pipeline near the Okavango Delta, a contractor unearths the skeleton of a long-dead Bushman. Kubu and Scottish pathologist, Ian MacGregor, are sent to investigate, and MacGregor discovers eight more skeletons.

Then an elder of the nearby village is murdered at his home. The local police believe it was a robbery, but Kubu thinks otherwise. So does a strange woman who claims it was an angry river spirit. The situation gets more confusing when the strange woman is found dead, apparently killed by a crocodile.

Assistant Superintendent Mabaku joins them as accusations of corruption are levelled and international outrage builds over the massacre of the Bushman families. But how do the recent murders link to the dead Bushmen, if at all? As Kubu and his colleagues investigate, they uncover a deadly covenant and begin to fear that their own lives may be in danger.

The young Kubu's second big case mixes local mythology and tradition with smart police work to make for a satisfyingly immersive mystery that begs resolution until the last, unpredictable moment.