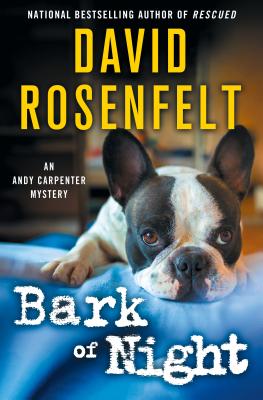 “Bark of Night is a treat, especially for those who love thrillers and dogs.” — Associated Press

When defense lawyer Andy Carpenter’s veterinarian asks to speak to him privately at the checkup of his golden retriever, Tara, the last thing Andy expects is Truman. Tiny, healthy, French bulldog Truman was dropped off days ago with instructions to be euthanized by a man everyone thought was his owner. But now the owner is nowhere to be found.

Andy is furious. Who would want to euthanize a perfectly healthy dog with no explanation? He is willing to whisk Truman away to the Tara Foundation, the dog-rescue organization which is Andy’s true passion. They will find a home for Truman. But that’s not all the vet tells Andy. Thanks to Truman’s chip, it’s discovered that the man wasn’t Truman’s owner at all . . . Truman's real owner has been murdered.

It’s now up to Andy – with help from his loyal sidekick Tara, Truman and the rest of the gang – to solve this case. In the latest in the popular Andy Carpenter mystery series, David Rosenfelt’s charmingly clever wit and love of dogs are back and better than ever.

DAVID ROSENFELT is the Edgar-nominated and Shamus Award-winning author of more than twenty Andy Carpenter novels, including One Dog Night, Collared, and Deck the Hounds; its spinoff series, The K-Team; the Doug Brock thriller series, which starts with Fade to Black; and stand-alone thrillers including Heart of a Killer and On Borrowed Time.

Rosenfelt and his wife live in Maine with an ever-changing pack of rescue dogs. Their epic cross-country move with 25 of these dogs, culminating in the creation of the Tara Foundation, is chronicled in Dogtripping.

"One of the best hooks ever by an author who specializes in them . . . Even dog haters should lap it up." – Kirkus Reviews

“Rosenfelt does a great job of unfolding an intricate plot . . . Andy is a smart, witty, relatable lead with a lot of heart, and he and his cohorts are a pleasure to spend time with. This is a treat for mystery readers and dog lovers.” – Publishers Weekly

“Growing weary of the detective hero with a wrecked marriage, a botched career, and a drinking problem? Try Rosenfelt’s series hero, Andy Carpenter, who is probably as close to Lord Peter Wimsey as the modern American crime genre can get.” — Booklist

“I love the Andy Carpenter Mystery novels. They’re so easy to read . . . They have really fun characters. And they have dogs. All this makes these books so much fun to read each time . . . If you’ve never read one of these Andy Carpenter books jump right in. Each novel reads like a stand-alone book and you get enough back information to understand who is who and what’s going on.”— Red Carpet Crash

"Bark of Night is a terrific read for any mystery lover who enjoy twists, turns, and surprises on every page!" —Suspense Magazine

“Look no further for a wagalicious summer read.” — Dogster Magazine