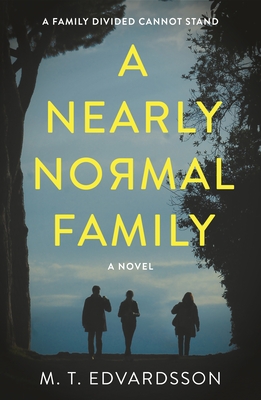 New York Times Book Review recommends M.T. Edvardsson’s A Nearly Normal Family and lauds it as a “page-turner” that forces the reader to confront “the compromises we make with ourselves to be the people we believe our beloveds expect.” (NYTimes Book Review Summer Reading Issue)

When the teenage daughter of responsible, upstanding parents is accused of murder, a family realizes that it isn’t love that will keep them together: it’s lies.

Eighteen-year-old Stella Sandell stands accused of the brutal murder of a man almost fifteen years her senior. She is an ordinary teenager from a respectable local family. What reason could she have to know a shady businessman, let alone to kill him?

Told in an unusual three-part structure, this gripping, domestic drama pushes a family to its limits. The father, a pastor, believes his daughter can only be innocent, despite mounting evidence. The mother, a defense attorney, believes no one is telling the truth. And the daughter, desperate for her dreams of the future, believes no one understands how far she is willing to go.

In this complex, multi-layered novel, every character’s loyalty and morality is tested. Are we duty-bound to defend our family, even with the evidence against them? Is anyone who they seem on the surface? And what are we willing to compromise to keep our lives, as we know them, intact?

M. T. Edvardsson is an author and teacher from Trelleborg, Sweden. He is the author of multiple novels and books for young readers in Sweden. A Nearly Normal Family is his first novel published in the United States. He lives with his family in Löddeköpinge, Sweden.

"At its core, A Nearly Normal Family asks: How well do you know your loved ones? Or your best friend? Or anyone? Whom can you trust? Edvardsson doesn't give easy answers, and even throws in commentary about the Swedish legal system when it comes to determining guilt or innocence. But the author raises provocative questions, wraps them up in a propulsive thriller and delivers an ultra-satisfying read that's far from ordinary."
—Shelf Awareness

"A NEARLY NORMAL FAMILY is a canny, intensely suspenseful legal thriller. A 18-year-old teenager is accused of murdering a 32-year-old man, provoking a crisis for every person close to her and challenging the commandments of the law as they confront the bonds of love and family life."
—Scott Turow, Author of Presumed Innocent and Testimony

“M. T. Edvardsson has written a deceptive and riveting novel. A NEARLY NORMAL FAMILY will make you question everything you know about those closest to you.”
—Karin Slaughter, Author of 18 international bestsellers