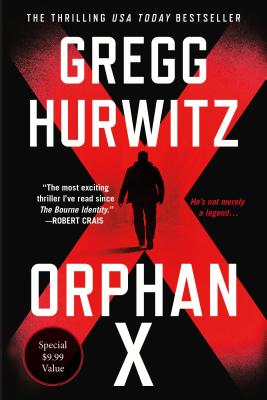 By Gregg Hurwitz
Email or call for price
Out of Print

“The U.S. government secretly trained a group of orphaned children to be lethal assassins when they grew up. Evan, one of these children and now a grown man, has left the program and disappeared, resurfacing only to help those in desperate need. It is through this work that one of his enemies has found him, but which enemy - the government, one of his fellow orphans, or a relative of one of the many bad guys he has gotten rid of? Filled with lots of twists and turns and neat techno gadgets, Orphan X takes you on a roller coaster ride that will leave you breathless and waiting for the next installment of the Nowhere Man.”
— Nancy McFarlane (E), Fiction Addiction, Greenville, SC

Who is Orphan X?

The Nowhere Man is a legendary figure spoken about only in whispers. It’s said that when he’s reached by the truly desperate and deserving, the Nowhere Man can and will do anything to protect and save them. But he’s not merely a legend.

Evan Smoak is a man with skills, resources, and a personal mission to help those with nowhere else to turn. He’s also a man with a dangerous past. Chosen as a child, he was raised and trained as an Orphan, an off-the-books black box program designed to create the perfect deniable intelligence asset: An assassin. Evan was Orphan X—until he broke with the program and used everything he learned to disappear. But now someone is on his tail. Someone with similar skills and training who will exploit Evan’s secret new identity as the Nowhere Man to eliminate him.

GREGG HURWITZ is the New York Times bestselling author of more than a dozen novels, including the #1 international bestseller Orphan X, the first in a series of thrillers featuring Evan Smoak. He has also written young adult novels: The Rains and its sequel, The Last Chance. Hurwitz's books have been shortlisted for numerous literary awards, graced top ten lists, and have been translated into twenty-eight languages.

Hurwitz is also a New York Times bestselling comic book writer, having penned stories for Marvel (Wolverine, The Punisher) and DC (Batman). Additionally, he has written screenplays for many major studios and written, developed, and produced television for various networks.