The Stories You Tell: A Mystery (Roxane Weary #3) (Paperback) 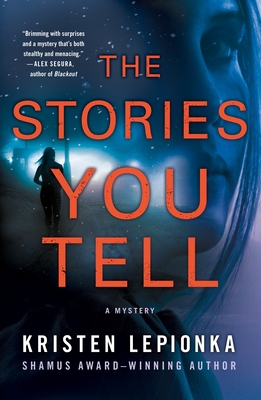 By Kristen Lepionka
Email or call for price.
Special Order

The third installment in the Shamus Award-winning and Anthony and Macavity Award-nominated Roxane Weary series.

A late-night phone call is never good news, especially when you’re Roxane Weary. This one is from her brother Andrew, whose evening was interrupted by a visit from Addison, a hip young DJ he knows. She was hysterical, but she wouldn’t say what was wrong. After using his phone, she left as quickly as she appeared, and Andrew is worried. That’s when Andrew calls Roxane.

But another late-night call occurs as well: Addison's father contacts the police after getting a panicked voicemail from his daughter. The only thing he could understand is the address she gave in the message— Andrew’s. Before long, the police are asking Andrew all about how he got the bloody scratch on his face and what he did to Addison. Meanwhile, another cop is found dead on the opposite side of town, leading to a swirl of questions surrounding a dance club whose staff—which includes Addison—has suddenly gone AWOL.

The Stories You Tell, Shamus Award-winning and Anthony and Macavity-Award nominated author Kristen Lepionka’s heart-pounding third novel, will keep readers on the edge of their seat with her signature twists and mile-high stakes.

KRISTEN LEPIONKA is the Shamus Award-winning and Anthony and Mcavity Award-nominated author of The Last Place You Look and What You Want to See. She grew up mostly in her local public library, where she could be found with a big stack of adult mysteries before she was out of middle school. She is a co-founder of the feminist podcast Unlikeable Female Characters, and she lives in Columbus, Ohio, with her partner and two cats.