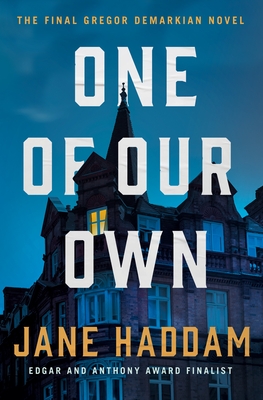 In Jane Haddam's One of Our Own, Gregor Demarkian, former FBI agent and police consultant, returns for his final case—a surprising murder and an attempted murder, which threaten the safety of his Philadelphia neighborhood.

A mysterious black van is spotted by several people at various times in the area around Cavanaugh Street, Philadelphia's Armenian-American enclave. Presumed by some to be related to the increasing ICE raids around the area, the mystery deepens one night when a body falls out of the back of the van when speeding through the neighborhood.

Marta Warkowski, a reclusive older woman, is found bound up in a garbage bag after it falls out of the van. In a coma, Warkowski is unable to tell police how she ended up as she did. When they go to search her apartment, the police find the dead body of her building's super, a man with whom she has a history of conflict. How did she end up in garbage bag in the back of a mysterious van? How did he end up dead in her locked apartment? What does all of this have to do with the real estate holdings of infamous local developer, Cary Alder?

Gregor Demarkian, former FBI agent and consultant, is ready to retire. He and his wife Bennis have agreed to foster a child, Javier, with a mysterious past and limited language skills. But he is pulled in once again, for a final case, to uncover the truth about the murder—and attempted murder—on Cavanaugh Street.

JANE HADDAM is the fiction pseudonym of Orania Papazoglou, the author of over thirty novels, most featuring Gregor Demarkian. She was a finalist for both the Edgar and the Anthony Award. The widow of mystery writer William DeAndrea, Haddam died in 2019.

"One of Haddam's best books." --Bookreporter.com