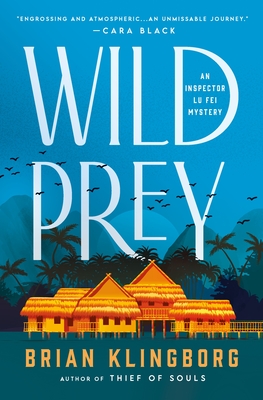 The search for a missing girl sends Inspector Lu Fei undercover into the wild corners of Myanmar, and the compound of the deadly and mysterious woman warlord responsible for the illegal trafficking of exotic animals and possibly more, in the next book from Brian Klingborg, Wild Prey.

Police Inspector Lu Fei has an unfortunate talent for getting himself into hot water with powerful and well-connected people. Which is why he’s been assigned to a backwater town in a rural area of Northern China and quietly warned to keep his head down. But while running a sting operation on the sale and consumption of rare and endangered animals, Lu comes across the curious case of a waitress who has gone missing. Her last known whereabouts: a restaurant frequented by local elites, owned by smooth-talking gangster, and known for its exotic -- and highly illegal -- delicacies.

As usual, Lu's investigation ruffles some feathers, resulting in his suspension from the police force. Lu figures he's reached a dead-end. Then he's contacted by a mysterious government official in Beijing who wants him to go undercover to track down the mastermind behind an illegal animal trafficking network -- and hopefully, the answer to the fate of the missing waitress. The mission will require Lu to travel deep into the lawless wilds of Myanmar, where he will risk his life to infiltrate the hidden compound of a mysterious and ruthless female warlord in a bloody and nearly hopeless quest for justice.

BRIAN KLINGBORG has both a B.A. (University of California, Davis) and an M.A. (Harvard) in East Asian Studies and spent years living and working in Asia. He currently works in early childhood educational publishing and lives in New York City. Klingborg is also the author of Kill Devil Falls.