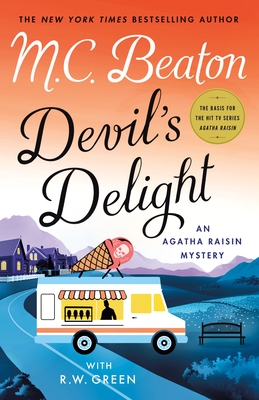 Agatha and her assistant, Toni, are driving to their friend Bill Wong’s long-awaited wedding, thinking of nothing more than what the beautiful bride will be wearing when a terrified young man comes running down the country lane towards them wearing…nothing at all.

The encounter leads them to become embroiled with a naturist group, a disappearing corpse, fantasy games, witchcraft, an ice cream empire, intrigue and murder. In the meantime, Agatha’s hectic life swirls along at dizzying pace, her private detective agency as busy as ever and her private affairs in turmoil, with old loves to contend with and a new suitor on the scene.

But when she begins to close in on a suspected murderer, she finds herself in deadly peril, as the sinister nature of the ice cream business leads her to a chilling conclusion…

A long-time friend of M. C. Beaton, R.W. GREEN has written numerous works of fiction and non-fiction. He lives in Surrey with his family and a black Labrador called Flynn.

"Trademark Beaton." —Booklist (starred) on Down the Hatch

"Green...ably continues the adventures of private detective Agatha Raisin, thorn in the side of conservative Cotswold society, in the diverting 32nd installment of this bestselling series...The prose sparkles as usual."
—Publishers Weekly on Down the Hatch