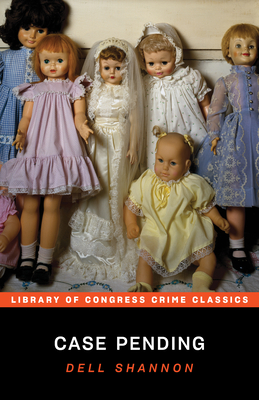 Another murder, another unanswered question. And Detective Mendoza hates to leave things undone.

Hers was the kind of casual homicide that occurred every week in a city like Los Angeles in the sixties. Beaten, robbed, and left in an abandoned lot, Elena Ramirez's death was like many others... in fact, nearly identical to a murder that happened six months earlier--a case that Detective Luis Mendoza was never able to solve.

The detective isn't a fan of puzzles but knows one when he sees it. He puts two and two together--these vicious murders must have been committed by the same deranged individual--and leads the charge into a case that is astounding in its complexity. Along with the begrudging help of Detective-Sergeant Hackett, Mendoza must separate the many twisted threads of this crime--from murder to black-market adoption and extortion.

Considered the "queen of the police procedural," Dell Shannon offers a glimpse into the world of police-work before the aid of forensics or technology. An Edgar Award finalist in 1961, Case Pending introduces the Mexican American Detective Mendoza, a dynamic character who will stop at nothing to find answers, working in a Los Angeles that had not forgotten the 1943 "zoot suit" riots targeting young Chicanos.

Bob Reiss is a New York based author and journalist, a former "Chicago Tribune" reporter and former correspondent for "Outside Magazine." His work has also appeared in "The Washington Post Magazine," "Smithsonian," "Parade," "Rolling Stone" and other national publications. Reiss has published 14 novels under both his own name and the pseudonym Ethan Black.