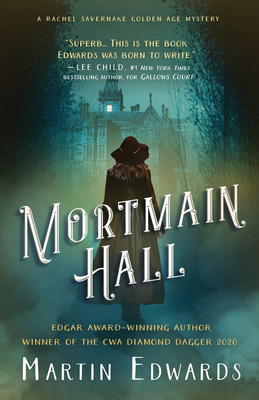 Next in the Rachel Savernake series, perfect for fans of the Golden age of mystery and readers of Anthony Horowitz and Sherry Thomas.

Framed for murder and with nowhere to go, Jacob Flint turns to an eclectic group of people on a remote estate to save him...

1930. A chilling encounter on London's Necropolis Railway leads to murder and a man escapes the gallows after a witness gives sensational evidence. After this string of strange, fatal events, journalist Jacob Flint discovers that he has been framed for murder. To save himself, he flees to Mortmain Hall, a remote estate on the northern coast. There, an eccentric female criminologist hosts a gathering of eclectic people who have all escaped miscarriages of cruel justice. This strange group puts Jacob a little on edge, but they may be his only hope to clear his name.

When a body is found beneath the cliffs near the house, it seems this gathering might be an ingenious plot to get away with murder. Are these eccentrics victims or are they orchestrators of the great deception? Jacob must now set out to uncover the labyrinthine of secrets within Mortmain Hall, alongside Rachel Savernake, woman whose relentless quest for the truth might just bring down the British establishment...