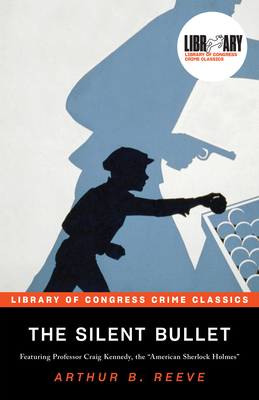 Next in the esteemed Library of Congress Crime Classics, a collection of twelve tales of intrigue and suspense, featuring Craig Kennedy, the 'American Sherlock Holmes'

First published in 1910, The Silent Bullet is the first collection of Arthur B. Reeve's Craig Kennedy mysteries. In this book of twelve tales of intrigue and suspense, readers are introduced to Kennedy, sometimes called the 'American Sherlock Holmes', and his friend and assistant, reporter Walter James. A professor at Columbia University, Kennedy uses his scientific expertise and inventions to solve cases, usually employing pioneering turn-of-the-century technology, such as hidden microphones, lie detectors, and a makeshift defibrillator. Full of thrilling escapades as well as insight into the discoveries of the early 1900s, The Silent Bullet is an adventure from start to finish.