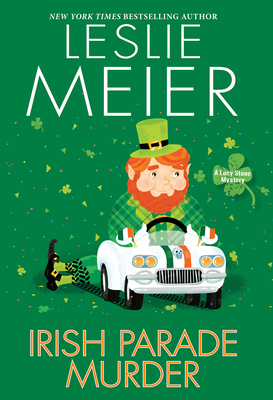 When a local corrections officer is sent to a fiery death during the St. Patrick’s Day parade, part-time reporter (and sometimes sleuth) Lucy Stone is tasked with clearing the name of her professional rival in New York Times bestselling author Leslie Meier’s latest mystery set in Tinker’s Cove, Maine!


Lucy Stone’s late-winter blues usually vanish by the time Tinker’s Cove goes green for its annual St. Patrick’s Day celebration. There’s just one wee problem that not even the luck of the Irish can fix—murder…

After returning from her father-in-law’s funeral in Florida, Lucy can almost hear the death knell of her part-time reporter job. The Pennysaver’s new hire, Rob Callahan, is young, ambitious, and positioning himself to become their next star. Adding insult to injury, Lucy only gets assigned the local St. Patrick’s Day parade after Rob passes on the story. But before beer flows and bagpipes sound, Rob is suspected of destroying more than other people’s careers…

It’s a shock when Rob is charged with sending a corrections officer from town to a fiery death. Yet despite the evidence, Lucy doubts he’s guilty, and she’s willing to follow that hunch into the darkest corners of the community. An unnerving mystery unfolds, and a strange woman reveals news that could change everything for Lucy and her family. As the personal and professional collide, Lucy realizes she’ll sooner discover a four-leaf clover than confront a killer with the gift of the gab and live to tell about it…

Leslie Meier is the New York Times bestselling author of over twenty Lucy Stone mysteries and has also written for Ellery Queen's Mystery Magazine. She is currently at work on the next Lucy Stone mystery. Readers can visit her website at www.LeslieMeier.com