Danger on the Atlantic (A Jane Wunderly Mystery #3) (Hardcover) 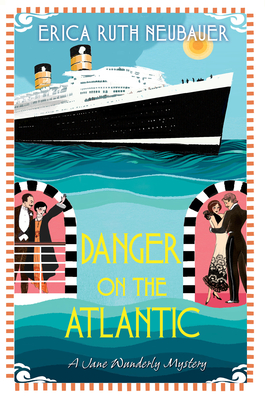 In Agatha Award-winning author Erica Ruth Neubauer’s third wanderlust-inspiring historical mystery, young American widow Jane Wunderly, there are worse fates than adventuring aboard a transatlantic liner with the only man who could change her mind about romance. Unfortunately, her first-class itinerary has an unexpected—and deadly—addition waiting just below deck…

Atlantic Ocean, 1926: Voyaging from Southampton to New York, self-reliant Jane is determined to prove herself a worthy investigator on the stately ship—even awkwardly going undercover as the fashionable wife of her magnetic partner, Mr. Redvers. Few details are known about the rumored German spy the duo have been tasked with identifying among fellow passengers, but new troubles unfold once wealthy newlywed Vanessa FitzSimmons announces the sudden disappearance of her husband at sea…

Miles Van de Meter, the man Vanessa rushed to marry in Monte Carlo, has allegedly vanished into thin air along with his luggage. Redvers guesses the shifty heiress may be weaving tall tales for fun between flutes of champagne, yet Jane isn’t convinced—not after the stunning murder of a trusted acquaintance sends them into uncharted waters. Facing two dangerous mysteries and a boat load of suspects, Jane must navigate a claustrophobic quest for answers before the culprits can slip from her grasp on land…or, worse, ensure she and Redvers never reach their destination.

Erica Ruth Neubauer is the Agatha Award-winning author of the Jane Wunderly Mysteries, as well as an Anthony Award and Lefty Award finalist. She spent eleven years in the military, nearly two as a Maryland police officer, and one as a high school English teacher, before finding her way as a writer. She has been a reviewer of mysteries and crime fiction for publications such as Publishers Weekly and Mystery Scene Magazine for several years, and she’s a member of Sisters in Crime and Mystery Writers of America. Erica Ruth lives in Milwaukee, WI. Visit her at EricaRuthNeubauer.com.