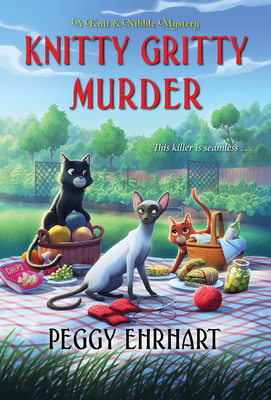 Pamela Paterson and the Knit and Nibble ladies have plenty of talents that don't revolve around yarn. But their penchant for patterns has led to a dangerous hobby they just can't quit--unraveling murders.

Most times of the year, the tight-knit community gardens in quaint Arborville, New Jersey, overflow with seasonal vegetables and herbs. But who planted the dead body? Farm-to-table enthusiast Jenny Miller had a cookbook in the works when she was suddenly found strangled by a circular knitting needle in her own plot. Now, the pressure is on Pamela and her neighbor Bettina as they weave together clues in search of the person who kept Jenny's renowned heirloom plants--and budding career--from growing. With suspects and victims cropping up like weeds, it'll take a whole lot more than green thumbs and creative minds this spring to entangle the crafty culprit...

Peggy Ehrhart is a former English professor who lives in Leonia, New Jersey, where she writes mysteries and plays blues guitar. She holds a Ph.D. in medieval literature from the University of Illinois and taught writing and literature at Queens College, CUNY, and Fairleigh Dickinson University, where she was a tenured full professor. Her short stories have appeared in Futures Mystery Anthology Magazine, Crime and Suspense, Flashing in the Gutters, Spinetingler, Crime Scene: New Jersey 2, and Murder New York Style. A longtime member of Mystery Writers of America and Sisters in Crime, Peggy served on the board of MWA New York as head of the Mentor Committee. She was president of Sisters in Crime NY/TriState from 2013 to 2015. Peggy regularly attends mystery-writing conferences and participates in conference panels and also gives talks on mystery fiction at libraries in New York, Connecticut, and New Jersey.