Just Watch Me: A Novel (A Riley Wolfe Novel #1) (Paperback) 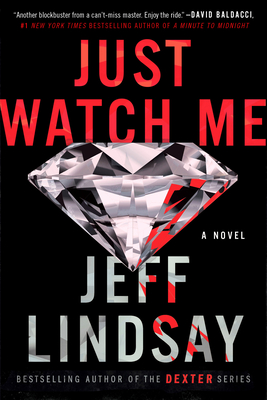 “Another blockbuster from a can’t-miss master. Enjoy the ride.”—David Baldacci, author of One Good Deed

From the author of the wildly successful Dexter series comes a new, mesmerizing bad guy we can root for: Riley Wolfe. He’s a master thief, expert at disguise, and not averse to violence when it’s needed. It’s no accident, though, that Riley targets the wealthiest 0.1 percent and is willing to kill them when they’re in his way: he despises the degenerate and immoral rich and loves stealing their undeserved and unearned valuables.

In this series launch, Riley aims for an extraordinary target in a heist that will make history. Riley will try to steal the Crown Jewels of Iran. Yes, these jewels are worth billions, but the true attraction for grabbing them comes down to one simple fact: it can’t be done. Stealing these jewels is absolutely impossible. The collection is guarded by space-age electronics and two teams of heavily armed mercenaries. No one could even think of getting past the airtight security and hope to get away alive, let alone with even a single diamond from the Imperial Collection.

No one but Riley Wolfe. He’s always liked a challenge.

But this challenge may be more than even he can handle. Aside from the impenetrable security, Riley is also pursued by a brilliant and relentless cop who is barely a step behind him.

With the aid of his sometime ally, a beautiful woman who is a master art forger, Riley Wolfe goes for the prize that will either make him a legend—or, more likely, leave him dead.

Jeff Lindsay is the New York Times bestselling author of the Dexter novels, which debuted in 2004 with Darkly Dreaming Dexter. They are the basis of the hit Showtime and CBS series Dexter.

Praise for Just Watch Me
“Another blockbuster from a can’t-miss master. Enjoy the ride.”—David Baldacci, author of One Good Deed

“A brashly retro escapist caper reminiscent of Topkapi and just as likely to be filmed.”—Kirkus Reviews

“A lot of fun . . . Fans of Lindsay’s Dexter novels will not be disappointed. Where will Riley strike next?”—Booklist (starred review)

“[A] terrific series launch . . . Fans of the Ocean’s Eleven film franchise will be eager for more.”—Publishers Weekly (starred review)

“Jeff Lindsay is back! With a character everyone will want to root for--Riley Wolfe, a super-thief who leaves no trace other than bodies, as necessary. What actor wouldn't want to play him?”—Andy Garcia

"With master thief Riley Wolfe, Jeff Lindsay gives us an anti-hero for our times, as morally ambiguous and hard to resist as his serial killer Dexter.”—Sarah Dunn, author of The Arrangement

"The plot of Just Watch Me spins quickly, with Riley’s clever use of disguises adding to the intrigue. How he insinuates himself in the museum is inspired. Riley bears watching as Just Watch Me has the makings of another long series."—Oline Cogdill, Crime Reads

"Just Watch Me is both an exciting crime story and a revealing exploration of the psychology of a master criminal. The writing is tight and vivid, the characters are convincingly portrayed, and the action is nonstop.”—Bruce De Silva, Associated Press

"An edge-of-your-seat read.”—Brad Thor on Today

"Dexter author does it again. . . . Loaded with action, mayhem . . . it is sure to be a successful series."—Florida Times-Union