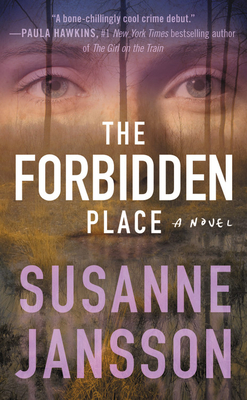 In this "bone-chillingly cool crime debut" (Paula Hawkins, author of The Girl on the Train), a young biologist studying the remote Swedish wetlands stumbles upon a body -- and finds that if the marsh's secrets can't stay buried, neither can hers . . .

Susanne Jansson was born in 1972 in Åmål, Sweden. She later moved to Gothenburg to work in advertising and then to New York to study photography. After returning to Sweden, she worked as a freelance photographer while studying journalism, and for the past twenty years she has been combining her work as a photographer with freelance journalism. She is the author of The Forbidden Place. Jansson lives with her family outside Gothenburg.

"The atmosphere is what makes me fall, head over heels: a lonely woman who rents out her city apartment and heads out into the wilderness. [...] Susanne Jansson skillfully builds mounting uncertainty. Is there something supernatural out there, in the mire? Or is there a person using the superstition for their own purposes? Does Nathalie have more reasons for coming to the marsh than she lets on? [...] The Forbidden Place is one of the best and most complete debut novels I've ever read."—Dagens Nyheter

"The Forbidden Place by Susanne Jansson has captivated and fascinated me. I have devoured this debut novel packed with psychological suspense and forces of nature in one sitting. [...] The milieu that Susanne Jansson portrays is astounding and the language with which she does so couldn't be more beautiful. [...] Simply magnificent!"—SR 3 Saarlandwelle

"The best book out there right now. [...] Debut writer Susanne Jansson is an easter gift to all nature-loving suspense fans. [...] What is buried in the peat bog does not decompose. It does not come to rest. But how do you satisfy the hunger of the dead? We wonder, feverishly turning the pages, and along the way we become experts in wetlands. And when The Forbidden Place has dug deep enough through the mysteries, we finally get our answers."—M Magasin

"THE FORBIDDEN PLACE is a slow-boiling novel that combines elements of classic and modern mysteries with discussions of such disparate topics as quantum physics anomalies, ancient mysticism, legends and religion...Jansson (skillfully translated by Rachel Willson-Broyles) has given us a first work that sits solidly in the mystery genre but blurs the lines around its edges...thought-provoking."
—Book Reporter

"This debut hits on some of the same themes of nature, legend, and isolated village creepiness as Paula Hawkins' Into the Water."—Booklist

"Can a suspense novel about a misty bog be thrilling? Hardly, you might think. But then you'd be wrong. Because with her debut novel Susanne Jansson writes herself into the tradition of distinguished Swedish crime writers, who we hope to hear more from."
—Nordjyske Stiftstidene

"The Forbidden Place navigates both the horror and suspense genres...All in all this is a well-written and refreshing debut."—Skanska Dagbladet

"The mysterious and mighty natural world plays a big part in Susanne Jansson's debut suspense novel. [...] The book's strength is the suggestive atmosphere and the depictions of the forces of nature."
—Göteborgs-posten

"Susanne Jansson's debut novel is thrilling, at times both creepy and frightening. [...] This book had shivers sent down my spine."
—Nya Wermlands Tidning

"A novel that bids for more. [...] an enchanting tale of mires, legends, present, and past. [...] Susanne Jansson succeeds astoundingly well in her debut. Her portrayals of the inhabitants of this backwater are warm and vivid. The milieu is the most important component when a marsh is at the center. The author writes it so that you can feel the damp air vibrating."
—Dast Magazine

"Jansson paints an atmospheric and mysterious portrait of the marsh with the help of mist, light, and old legends. It becomes a place where life and death collide, a sort of anteroom to the realm of the dead. [...] Since The Forbidden Place is one of the absolute best suspense debuts this year, I'll gladly return to the enthralling milieus of Dalsland and to the joie-vivant Maya and her way of seeing things through images again."—Crimegarden

"The Forbidden Place is Susanne Jansson's debut novel and she offers a well-balanced combination of horror, suspense, folklore, and biology. [...] Susanne Jansson skillfully incorporates this into her story to create a suggestive and cringing atmosphere. [...] The Forbidden Place is a very interesting and distinctive suspense debut, and it leaves you begging for more."—Johannes Deckarhorna

"A very well-written book with a thrilling plot. It's a great book for anyone looking for a crime novel to fall in love with."
—Lieliska Lasamviela

"A very interesting read! The characters and their different lives and fates were captivating. The resolution was unexpected and steeped in mystery."
—Dom Graudi

"An ominous read with a creepy ambiance."
—Prima Mag