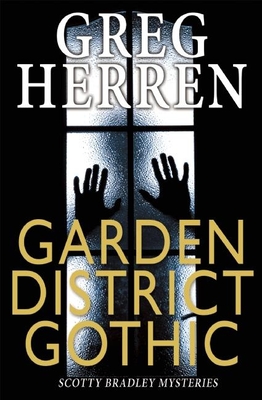 The city of New Orleans was rocked to its very shaky foundations when the body of six-year-old beauty queen Delilah Metoyer was found, strangled, in the carriage house behind her family's Garden District mansion. The crime was never solved, and the Metoyer family shattered in the aftermath of the crime. Thirty years later, Delilah's brother asks Scotty to finally find his sister's killer...putting Scotty and his friends and family into the crosshairs of a vicious killer. A Scotty Bradley Mystery.

Greg Herren is a New Orleans-based author and editor. He is a co-founder of theSaints and Sinners Literary Festival, which takes place in New Orleans every May. He is the author of twenty novels, including the Lambda Literary Award winning Murder in the Rue Chartres, called by the New Orleans Times-Picayune "the most honest depiction of life in post-Katrina New Orleans published thus far." He co-edited Love, Bourbon Street: Reflections on New Orleans, which also won the Lambda Literary Award. His young adult novel Sleeping Angel won the Moonbeam Gold Medal for Excellence in Young Adult Mystery/Horror. He has published over fifty short stories in markets as varied as Ellery Queen's Mystery Magazine to the critically acclaimed anthology New Orleans Noir to various websites, literary magazines, and anthologies. His erotica anthology FRATSEX is the all time best selling title for Insightoutbooks. He has worked as an editor for Bella Books, Harrington Park Press, and now Bold Strokes Books.A long-time resident of New Orleans, Greg was a fitness columnist and book review er for Window Media for over four years, publishing in the LGBT newspapers IMPACT News, Southern Voice, and Houston Voice. He served a term on the Board of Directors for the National Stonewall Democrats, and served on the founding committee of the Louisiana Stonewall Democrats. He is currently employed as a public health researcher for the NO/AIDS Task Force, and is serving a term on the board of the Mystery Writers of America.