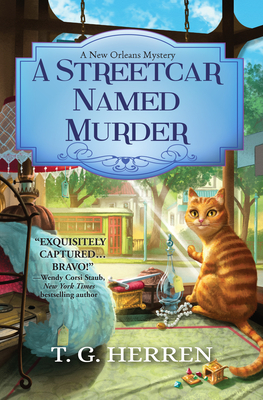 Blackmail in the Big Easy turns to cold-blooded murder in this debut cozy mystery perfect for fans of Jane K. Cleland.

When the mysterious letter arrives by courier, Valerie Cooper doesn’t know what to make of it. She’s become the beneficiary of her late husband’s estranged uncle’s will—a man she never knew—and inherited a majority partnership in the family’s company, New Orleans Fine Antiques. Valerie knows nothing about antiques, but she decides to learn the business and become an active partner. She’s also got her hands full fending off Collette, a woman who wants to sell the huge old house in the Irish Channel neighborhood Valerie and her husband painstakingly renovated.

Valerie isn’t interested in selling—but when her best friend Lauren, drags her to a costume party for the women’s Mardi Gras club, the Krewe of Athena, she stumbles over Collette’s body, a jeweled dagger sticking out of her chest. In a rush of panic, Valerie recognizes the dagger from her shop—and before she knows it, she’s become murder suspect number one.

Egged on by Lauren, she starts digging into Collette’s business dealings, and the deeper she digs, the dirtier it gets. Now all fingers are pointing at Valerie. In a desperate bid to clear her name, Valerie frantically tries to find who could have gotten hold of the dagger. But among a cadre of guests in full costume, it could be impossible to find the thief—and unmask the real killer.

T. G. Herren is a long time resident of New Orleans, where every day is Anything Can Happen Day. Herren has also worked as a sports/fitness journalist, an editor, and spent far too many years working in the airline industry.

Praise for A Streetcar Named Murder:
“[A] lively series launch . . . Fans of Katherine Hall Page’s Faith Fairchild mysteries will want to check this out.”
—Publishers Weekly

“This well-plotted debut cozy is nicely framed by the antique trade.”
—Booklist

“Delightful . . . a mystery that is complex and emotional and leads to a satisfying conclusion.”
—Manhattan Book Review, 5-star review

“An original and fun read from first page to last.”
—Midwest Book Review

“A good start to this new series, set in New Orleans, with fun characters, and a good murder mystery.”
—Red Carpet Crash

“A delicious southern gothic cozy told with heart and humor . . . Its sultry Big Easy setting, intriguing mystery, and cast of characters as colorful as a Mardi Gras float make it a must-read.”
—Ellen Byron, Agatha Award-winning author of the Cajun Country and Vintage Cookbook Mysteries

“Take a trip to New Orleans without leaving home in TG Herren’s A Streetcar Named Murder. When an insult from her PTA nemesis forces empty-nester Valerie Cooper to reconsider her life, she never expects change to come in the form of an antique shop inherited from an uncle she never knew her late husband had. That’s just the beginning of the family secrets in this delightful series debut that will leave you swinging your beads and planning your next Mardi Gras costume!”
—Leslie Budewitz, three-time Agatha Award-winning author of the Spice Shop and Food Lovers’ Village Mysteries

“If mystery fans had a Mardi Gras krewe, they’d have stacks of T.G. Herren’s A Streetcar Named Murder to throw to lucky parade goers. You’ll feel as if you’re driving down New Orleans’s Magazine Street and St. Charles Avenue along with widow Valerie Cooper as she navigates a mystery of murky inheritances, simmering hate, and long-held secrets that lead to murder.”
—Leigh Perry, author of the Family Skeleton Series