The Delightful Life of a Suicide Pilot (A Dr. Siri Paiboun Mystery #15) (Hardcover) 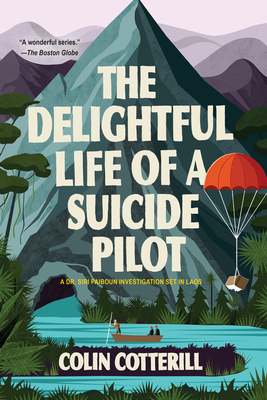 Laos, 1981: When an unofficial mailman drops off a strange bilingual diary, Dr. Siri is intrigued. Half is in Lao, but the other half is in Japanese, which no one Siri knows can read; it appears to have been written during the Second World War. Most mysterious of all, it comes with a note stapled to it: Dr. Siri, we need your help most urgently. But who is “we,” and why have they left no return address?

To the chagrin of his wife and friends, who have to hear him read the diary out loud, Siri embarks on an investigation by examining the text. Though the journal was apparently written by a kamikaze pilot, it is surprisingly dull. Twenty pages in, no one has died, and the pilot never mentions any combat at all. Despite these shortcomings, Siri begins to obsess over the diary’s abrupt ending . . . and the riddle of why it found its way into his hands. Did the kamikaze pilot ever manage to get off the ground? To find out, he and Madame Daeng will have to hitch a ride south and uncover some of the darkest secrets of the Second World War.

Colin Cotterill is the author of fourteen other books in the Dr. Siri Paiboun series: The Coroner's Lunch, Thirty-Three Teeth, Disco for the Departed, Anarchy and Old Dogs, Curse of the Pogo Stick, The Merry Misogynist, Love Songs from a Shallow Grave, Slash and Burn, The Woman Who Wouldn't Die, Six and a Half Deadly Sins, I Shot the Buddha, The Rat Catchers' Olympics, Don't Eat Me, and The Second Biggest Nothing. His fiction has won a Dilys Award and a CWA Dagger in the Library. He lives in Chumphon, Thailand, with his wife and a number of deranged dogs.

Praise for The Delightful Life of a Suicide Pilot

"A quirky, fiendishly clever series that has long been one of my absolute favorites."
—Bruce Tierney, BookPage, Starred Review

“This wonderful series has consistently managed to convey the beauty and sadness of this damaged country through the wisdom and humor of its protagonist.”
—The Boston Globe

“[Dr. Siri] has rarely been funnier or more astute. Cotterill is writing at the top of his game.”
—Publishers Weekly, Starred Review