What Is Time to a Pig? (A Cold Storage Novel #3) (Paperback) 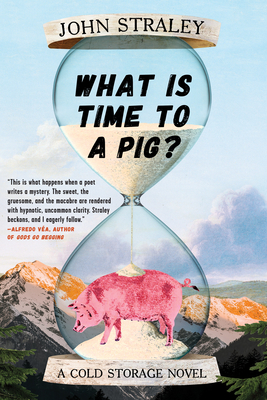 In this mind-bending crime novel by Shamus Award–winner John Straley, one man attempts to save his town from nuclear annihilation.

It’s been seven years since Gloomy Knob landed in the Ted Stevens High-Security Federal Penitentiary and five years since the end of the war, the one North Korea started when they sent a missile to Cold Storage, Alaska. Serving a life sentence for the murder of his sister, Gloomy spends histime trying to forget the past.

Then one day, Gloomy is snatched from his off-site work station. Instead of celebrating his newfound freedom, Gloomy comes unmoored—he feels he belongs in prison. But his kidnappers believe Gloomy knows where a second nuclear warhead is hidden and demand to know where it is. The clock is ticking, and Gloomy knows that unless he finds the missing warhead fast, or his wife, his friends, and the entire town of Cold Storage will be obliterated. The only problem? He has no idea where it is.

As Gloomy struggles to escape, the memories he fought hard to repress begin to creep out from the strange corners of his mind, first in rivulets, then in waves. In a drug-induced haze, Gloomy makes a discovery that may just bring him the closure he desires—if it doesn’t kill him first.

John Straley was born in Redwood City, California. He received a BA in English from the University of Washington but settled in Sitka, Alaska, with his wife, Jan, a prominent whale biologist. John worked for thirty years as a criminal defense investigator, and many of the characters in his books were inspired by his work. Now retired, he lives with his wife in a bright green house on the beach and writes in his weathertight office overlooking Old Sitka Rocks. The former Writer Laureate of Alaska, he is the author of over ten novels, including Cold Storage, Alaska and the Shamus Award-winner The Woman Who Married a Bear, the first Cecil Younger investigation.

Praise for What Is Time to a Pig?

“John Straley is an incredible writer with a scary imagination.”
—Dayton Daily News

“Straley has brought together what are clearly social and political issues he cares deeply about—even as he lampoons them . . . John Straley takes us on a wild ride, but with the reins held firmly in his able hands.”
—Anchorage Daily News

“A big, bold, new departure . . . Straley wanders into Michael Chabon territory with a bit of alt-historical chaos, takes a detour to the edge of dystopian sci-fi, and goes right back to a realism that is more real than the grittiest of noir writing . . . a fitting book for these stranger-than-fiction times.”
—Daily Sitka Sentinel

“The hallucinatory narrative style matches our confused era . . . The reader willing to go along with the unconventional narration will be rewarded by sharp commentary on our times and equal parts poetry and offbeat humor.”
—Reviewing the Evidence

“John Straley creates a maddeningly insane but wholly convincing universe that fires powerfully on the level of plot. But What Is Time to a Pig? does much more. It manages to skillfully ask questions about the nature of reality, memory, and dreams while speculating on what may become of our addiction to incarcerating our fellow brothers and sisters. The result is the best kind of intellectual head trip.”
—Sergio de la Pava, author of A Naked Singularity and Lost Empress

“John Straley is a masterful storyteller, and one of America’s finest novelists. In What Is Time to a Pig? Straley captures an American society of dysfunction and a corrections system run amok, a not so distant future that we can only hope we never see. Straley delivers humor and heart with a hard punch to the gut. His quirky characters live and breathe on the page with such life and force you feel like you’re in the room with them. I can’t answer the question of What is time to pig?—but I can say the time I spent devouring Straley’s new Cold Storage novel was the best reading experience I’ve had all year.”
—Don Rearden, author of the Washington Post notable novel The Raven’s Gift

“This is one of those books where the writing is so dazzling the story almost doesn’t matter, but the story is wonderful too: a satirical 21st century thriller that’s both a page-turner and the frame for a much deeper contemplation. Straley’s prose is achingly perceptive, cinematically vivid and just pure pleasure to read.”
—Scott Hawkins, author of The Library at Mount Char

“When a master writer like John Straley comes at you with a book as funny, biting, intelligent, gritty, and propulsive as What Is Time to a Pig?, you can’t help but sit up and take notice. Upon a foundation of nuclear proliferation, the Ghost Dance movement, the history and future of Alaska, and the philosophical ramifications of individual freedom, Straley has built a narrative as absurd as anything in today's news cycle, and all told in his signature voice: warm, inviting, sharp, witty, and impossible to turn away from.”
—Christian Kiefer, author of Phantoms

“What Is Time to a Pig? represents a giant leap of imagination for John Straley. This is what happens when a poet writes a mystery. The sweet, the gruesome, and the macabre are rendered with hypnotic, uncommon clarity. Straley beckons and I eagerly follow him on what Emerson called ‘the stairway of surprise.’”
—Alfredo Véa, author of Gods Go Begging

“John Straley takes readers on another dangerous journey full of mystery and deception. Along with old friends and new acquaintances, we travel to places as familiar as Cold Storage, Alaska, and places as unfamiliar as our strangest dreams. With trademark wit, Straley employs first-class storytelling skills, leading readers from What will happen next? to What is happening right now? Readers who follow Straley’s intriguing characters find themselves contemplating deep human concerns: personal faith, an uncaring justice system, eroticism, politics, torture, nuclear war, repressed memory, and forgiveness. In What Is Time to a Pig?, Straley once again uses expert and provocative storytelling techniques to raise thought-provoking questions. A great read that will gain even more fans of this truly Alaskan writer.”
—Ernestine Hayes, author of The Tao of Raven

“A sometimes uneasy mix of humor and suspense, the novel features some lively and eccentric characters, some wild plotting, and some very entertaining—if not entirely realistic—dialogue . . . the author’s fans will recognize the same eye for character detail and the same fluid writing style.”
—Booklist

“If Tim Dorsey lived in Cold Storage, Alaska, he might come up with something as outlandish, as off the wall as John Straley can. Let go of your reality, sit back for a wild futuristic ride. Gloomy Knob has been kidnapped from the private high-security prison. Iranians and the US government are among those desperate to find a misfired North Korean warhead, and violence plus physical and psychological manipulations tactics will be used to make Gloomy talk. They all think he knows where it is and are getting desperate. What Is Time To A Pig? makes sense in a Straley kind of way and is thoroughly entertaining.”
—Becky Milner, Vintage Books (Vancouver, WA)

A Boston Globe Best Crime Book of the Year

"Straley strikes the perfect balance of humor and pathos in this story about the McCahon brothers.”
—New York Times Book Review

"[Straley] writes crime novels populated by perpetrators whose hearts are filled with more poetry than evil."
—The Wall Street Journal

"Straley isn’t prolific, but when he does publish a book it’s a gem . . . The crime aspect of Cold Storage, Alaska is pretty casual. Straley’s mostly interested in his characters and how they interact on a personal level . . . It’s always a pleasure to read Straley’s vivid studies of these folks—the slightly cracked, rugged and very funny characters of the Far North."
—The Seattle Times

“Thoroughly enjoyable and slightly wacko . . . Dashes of magical realism mixed with ironic humor reminiscent of the Coen brothers and violence worthy of Quentin Tarantino make this second series novel a winner. Compelling characters and deft treatment of themes like redemption and the power of community take it to a level beyond.”
—The Boston Globe

“Lesser writers look to their characters’ poor choices and attempts to rectify them, John Straley loves his characters for just those choices. Hölderlin wrote: 'Poetically man dwells on the earth.' Some of us wind up in limericks, some in heroic couplets. But damned near every one of us, sooner or later, ends up in one of Straley’s wise, wayward, wonderfully unhinged novels.”
—James Sallis, author of Drive and the Lew Griffin mysteries

“What a warm, engaging, profoundly human book this is: its skin crackling, its heart enormous and open. It's a mystery with judicious blasts of violence and dread, but it opens also onto the bigger mysteries—of community, of family, of place. The several lives that intertwine throughout the story reach moments of quiet grace that resonate stealthily but deeply.”
—John Darnielle, lead singer of The Mountain Goats and author of Wolf in White Van