Blown by the Same Wind (A Cold Storage Novel #4) (Hardcover) 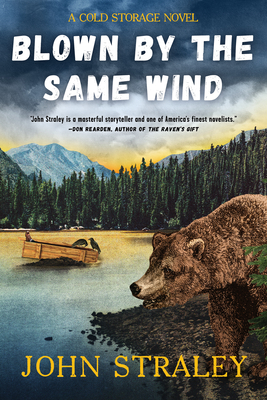 Mysterious dreams of grizzly bears, a bumbling FBI agent, and a tense hostage negotiation have the town of Cold Storage, Alaska, turned upside down.

Things in the sleepy fishing town of Cold Storage, Alaska, are changing. It’s the summer of 1968; the men are wearing their hair long, the Vietnam War is at its height, and multiple assassinations have gripped the country. But some things remain the same. Ellie’s bar is still the place to catch up on the town gossip, and there’s a lot to talk about, from the boys who have returned from the war (and the ones who haven’t), to the robberies that are plaguing the locals, to the new guy in town: a famous monk from Kentucky.

Ellie, herself a fugitive of sorts, is curious about this “Brother Louis,” and worries about his motives, but he seems harmless enough. However, when a handful of other outsiders arrive to town and start poking around the bar and asking questions, Ellie begins to have reservations. Have they followed this mysterious monk, rumored to be the famous author Thomas Merton, to Cold Storage? And what is it that they want, particularly the inept FBI agent with the strange name: Boston Corbett?

Inspired by assassination conspiracy theories, the life of Thomas Merton, and the changing tide of the ’60s, Blown by the Same Wind is a coming-of-age story for the town of Cold Storage itself.

John Straley, a criminal investigator for the state of Alaska, lives in Sitka, where he and his wife, a marine biologist, raised their only son. He is the Shamus Award–winning author of The Curious Eat Themselves, The Woman Who Married a Bear, and The Big Both Ways, and was appointed the Writer Laureate of Alaska in 2006.

Praise for Blown by the Same Wind

“The grounding presence of Merton and a traumatized Vietnam vet he befriends lend the book a gentle spirituality. Even in a world torn by war and racism, they exemplify the notion that goodness and grace are possible.”
—Air Mail

“John Straley, one of Alaska’s best-known and best-loved writers, continues to deliver . . . Straley has brought together an intriguing mix of historical events to play within his wild imagination.”
—Anchorage Daily News

“Cold Storage feels like a living, breathing place from the start, the author describing all the little details of life in an easy-going, fluid style . . . There is extreme beauty in Straley’s writing, countered with extreme brutality at points in the story . . . This is a great novel if you seek a world to escape into and ponder for hours afterwards.”
—Crime Fiction Lover

“If you've embraced Donald Westlake, Janet Evanovich's Stephanie Plum series, or the Junior Bender books from Timothy Hallinan, I hope you're already ordering a copy of Blown by the Same Wind. You're going to have a lot of fun.”
—Kingdom Books

“Terrific . . . Like the earlier novels in the series, this one is funny and quirky, a lighter change of pace from the Younger books and a delight for fans of small-town comic mysteries with a bit of bite.”
—Booklist, Starred Review

“Excellent . . . Readers looking for action will be amply rewarded, but the book’s main appeal lies in the vividly drawn characters and the author’s enchanting descriptions of the Alaskan outdoors. This thoughtful look at the politics and culture of a bygone era should win Straley new fans.”
—Publishers Weekly, Starred Review

“[Blown by the Same Wind] reads like a cross between historical fiction and mystery, with a dose of off-the-wall weirdness thrown in for good measure.”
—Library Journal

Praise for the Cold Storage Novels

“[Straley] writes crime novels populated by perpetrators whose hearts are filled with more poetry than evil.”
—The Wall Street Journal

“It’s always a pleasure to read Straley’s vivid studies of these folks—the slightly cracked, rugged and very funny characters of the Far North.”
—The Seattle Times

“What a warm, engaging, profoundly human book this is: its skin crackling, its heart enormous and open. It's a mystery with judicious blasts of violence and dread, but it opens also onto the bigger mysteries—of community, of family, of place. The several lives that intertwine throughout the story reach moments of quiet grace that resonate stealthily but deeply.”
—John Darnielle, author of Devil House

“Straley has brought together what are clearly social and political issues he cares deeply about—even as he lampoons them . . . John Straley takes us on a wild ride, but with the reins held firmly in his able hands.”
—Anchorage Daily News