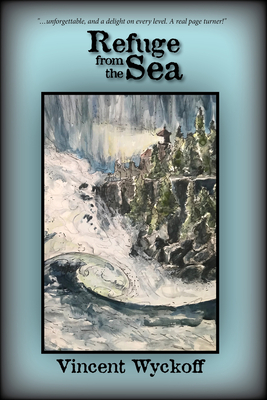 In the spring of 1909, four dozen intrepid individuals endeavored to construct a lighthouse atop a 130 foot escarpment over the frigid waters of Lake Superior. There were no roads or towns nearby. In Refuge From the Sea, Abby Simon, heroine of the Black Otter Bay series, discovers a journal written more than 100 years ago by one of the men building Split Rock Lighthouse. Entranced by the courage and commitment of this fellowship of strangers struggling against the wilderness, Abby engages the townsfolk to help uncover hidden clues to this historic undertaking. But when the journal comes to a sudden stop with the writer falling into the icy depths of Lake Superior, Abby is more determined than ever to uncover his fate. Refuge From the Sea is a mystery without a murder, a love story, and a tall tale of heroic determination, all set to the backdrop of the temperamental Lake Superior.

A native son of Minneapolis, Vincent Wyckoff dedicated a career to the U.S. Postal Service. His first book, Beware of Cat, and Other Encounters of a Letter Carrier, celebrates the stories of people on his route. Black Otter Bay, his first work of fiction, was a finalist for the 2016 MIPA award. It was followed by the sequel, Nightwatchers. Refuge From the Sea is the third installment. His stories have been published in several local periodicals, as well as the anthology, Home. Wyckoff and his wife, Sybil, are longtime residents of south Minneapolis.

"The world needs more wise and gentle voices like Vince Wyckoff's. His humanity and humor shine a light on the everyday world, making it a place in which we want to pull up a chair and bask a while.” —Lorna Landvik, author of Oh My Stars: A Novel