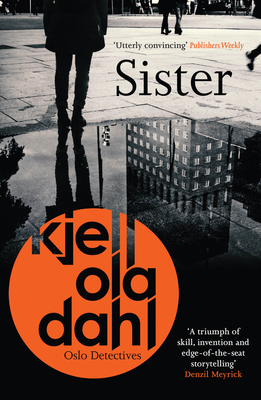 The Oslo Detectives are back in another chilling slice of Nordic Noir … Frølich searches for the mysterious sister of a young female asylum seeker, but when people start to die, everything points to an old case and a series of events that someone will do anything to hide…

Suspended from duty, Detective Frølich is working as a private investigator, when his girlfriend’s colleague asks for his help with a female asylum seeker, who the authorities are about to deport. She claims to have a sister in Norway, and fears that returning to her home country will mean instant death.

Frølich quickly discovers the whereabouts of the young woman’s sister, but things become increasingly complex when she denies having a sibling, and Frølich is threatened off the case by the police. As the body count rises, it becomes clear that the answers lie in an old investigation, and the mysterious sister, who is now on the run…

A dark, chilling and up-to-the-minute Nordic Noir thriller, Sister is also a tense and well-plotted murder mystery with a moving tragedy at its heart, cementing Kjell Ola Dahl as one of the greatest crime writers of our generation.

‘Kjell Ola Dahl has always been skilful at character and setting, but the particular defining characteristic of Sister is the steadily accelerating pace, handled with a sure touch. And Frølich remains a rounded and intriguing character, particularly in this latest iteration’ Barry Forshaw, Financial Times

‘Dark, stylish and suspenseful … the perfect example of why Nordic Noir has become such a popular genre’ Reader’s Digest

‘If you have never sampled Dahl, now is the time to try’ Daily Mail

‘Suspenseful, beautifully and clearly written, with a sure-footed plot, this is a book that thrills’ Live & Deadly

‘Dahl is a quiet master of the detective thriller, delivering complex plots and a simpatico hero — Frank Frolich, cop turned PI — with Chandleresque elan plus a serious intelligence that roots out essential truths. Here, Frolich is pulled into the “shadowlands” of Norway’s asylum seekers and those who profit from them, in an impeccably plotted gold-star, A-grade work of Scandi noir’ The Times

One of the fathers of the Nordic Noir genre, Kjell Ola Dahl made his debut in 1993, and has since published 11 novels, the most prominent of which is a series of police procedurals cum psychological thrillers (Oslo Detectives series) featuring investigators Gunnarstranda and Frølich. In 2000 he won the Riverton Prize for The Last Fix and he won both the prestigious Brage and Riverton Prizes for The Courier in 2015. Don Bartlett has worked with a wide variety of Danish and Norwegian authors, including Jo Nesbø and Gunnar Staalesen’s Varg Veum series. He also translated Faithless, the previous book in Oslo Detective series.

"This is a must for fans of Nordic noir." —Publishers Weekly, starred review