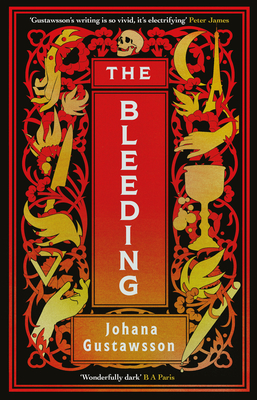 Queen of French Noir, Johana Gustawsson returns with a spell-binding, dazzlingly dark gothic thriller that swings from Belle É poque France to 21st-century Quebec, with an extraordinary mystery at its heart… FIRST in a bewitching new series

‘ A wonderfully dark, intricately woven historical thriller spanning three generations … it will have you hooked from the very first page’ B A Paris

1899, Belle É poque Paris.  Lucienne’ s two daughters are believed dead when her mansion burns to the ground, but she is certain that her girls are still alive and embarks on a journey into the depths of the spiritualist community to find them.

1949, Post-War QuÉ bec.  Teenager Lina’ s father has died in the French Resistance, and as she struggles to fit in at school, her mother introduces her to an elderly woman at the asylum where she works, changing Lina’ s life in the darkest way imaginable.

2002, Quebec.  A former schoolteacher is accused of brutally stabbing her husband – a famous university professor – to death. Detective Maxine Grant, who has recently lost her own husband and is parenting a teenager and a new baby single-handedly, takes on the investigation.

Under enormous personal pressure, Maxine makes a series of macabre discoveries that link directly to historical cases involving black magic and murder, secret societies and spiritism … and women at breaking point, who will stop at nothing to protect the ones they love…

‘ I found myself racing through the book, always wanting one more page, one more chapter. A wonderfully creepy, unsettling read, with a superb twist in its tail‘ James Oswald

‘ I was hooked from the first page – a stunning and beautifully written gothic thriller full of atmosphere, intrigue and delight’ Alexandra Benedict

‘ What a brilliant, brilliant book … the last chapters knocked me sideways, and it’ s a long time since that’ s happened’ Lisa Hall

***NUMBER ONE BESTSELLER IN FRANCE***

***Longlisted for the CWA International Dagger***

‘ A satisfying, full-fat mystery’   The Times

‘ A real page-turner, I loved it’   Martina Cole

‘ A bold and intelligent read’   Guardian

‘ Gritty, bone-chilling, and harrowing – it’ s not for the faint of heart, and not to be missed’   Crime by the Book

Born in Marseille, France, and with a degree in Political Science, Johana Gustawsson has worked as a journalist for the French and Spanish press and television. Her critically acclaimed Roy & Castells series, including Block 46, Keeper and Blood Song, has won the Plume d’Argent, Balai de la découverte, Balai d’Or and Prix Marseillais du Polar awards, and is now published in nineteen countries. A TV adaptation is currently underway in a French, Swedish and UK co-production.

David Warriner translates from French and nurtures a healthy passion for Franco, Nordic and British crime fiction. Growing up in deepest Yorkshire, he developed incurable Francophilia at an early age. Emerging from Oxford with a modern languages degree, he narrowly escaped the graduate rat race by hopping on a plane to Canada – and never looked back. More than a decade into a high-powered commercial translation career, he listened to his heart and turned his hand again to the delicate art of literary translation. David has lived in France and now calls beautifulBritish Columbia home.

'A wonderfully dark and intricately woven historical thriller spanning three generations, THE BLEEDING will have you hooked from the very first page' —B A Paris, author, Behind Closed Doors

***Longlisted for the CWA International Dagger***

‘A relentless heart-stopping masterpiece, filled with nightmarish situations that will keep you awake long into the dark nights of winter’ New York Journal of Books

‘Historical sections highlight, in distressing detail, the atrocious treatment of mothers-to-be in Franco’s Spain … A satisfying, full-fat mystery’ The Times

‘Gritty, bone-chilling, and harrowing – it’s not for the faint of heart, and not to be missed’ Crime by the Book

‘Intricately plotted, visceral and emotional the author ramps up the tension and the unfolding keeps the reader guessing to the very end. Scenes are raw, vivid and gripping’ Promoting Crime

‘I don’t think there’s a crime writer who writes with such intelligence, darkness and deep sadness as Johana Gustawsson. This was extraordinary’ Louise Beech

‘Blood Song caught and has held onto my thoughts, it is clever, provocative, and a seriously good read’ LoveReading

‘A fascinating and engrossing read, but also one that I found intensely harrowing, deeply intimate and which made me cry’ Live & Deadly

‘A real page-turner, I loved it’ Martina Cole


We only stock Mystery Fiction in our store. This website shows every book we can possibly order. If you want a non-mystery we can order it in or ship it directly to your house through Ingram. If you want to know what we have in stock, please call or email us, we will happily check our shelves. 612.870.3785. onceuponacrimebooks@gmail.com.