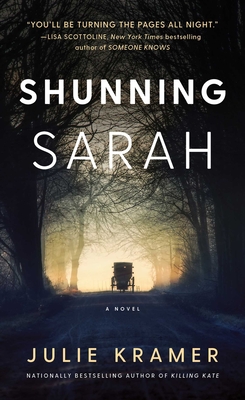 In this thrilling entry in the nationally bestselling Riley Spartz series, an insular Amish town is rocked by a shocking murder and a secret that won’t stay buried. “A captivating heroine you’ll root for and a shocking ending you won’t see coming, Shunning Sarah delivers with a satisfying punch” (Alex Kava, New York Times bestselling author).

When investigative reporter Riley Spartz hears that a young boy is trapped in a sinkhole located in a peaceful Amish farm community outside Minneapolis, her reporter’s nose catches the sweet scent of a thrilling news story. But she has no idea just how big this story truly is…because the boy is not alone.

There’s also a corpse in the sinkhole—and it didn’t die of natural causes. While an area peopled by the upright Amish doesn’t seem a likely location for a brutal murder, Riley uncovers a dark web of fraud and deception driven by motives as old as the Bible: sex and money. Determined to bring the killer to justice, Riley embarks on a dangerous game of cat and mouse but can she stop the murderer before anyone else—including herself—becomes the next victim?

With “the perfect mix of suspense, excitement, romance, and surprises to keep the discriminating crime fiction reader captivated” (Library Journal, starred review), Shunning Sarah is a nail-biting thriller that will keep you on the edge of your seat.

Julie Kramer is a journalist turned novelist. She writes a series of thrillers set in the desperate world of TV news. Julie has won the Daphne du Maurier Award for Mainstream Mystery/Suspense, RT Reviewer’s Choice Award for Best First Mystery, as well as the Minnesota Book Award. Her work has also been nominated for the Anthony, Barry, Shamus, Mary Higgins Clark, and RT Best Amateur Sleuth Awards. She formerly ran WCCO-TV’s investigative unit before becoming a freelance network news producer for NBC and CBS. She lives with her family in White Bear Lake, Minnesota.