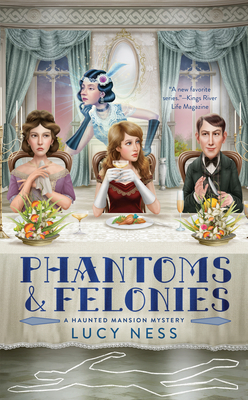 Avery Morgan has been hired to breathe new life into the Portage Path Women's Club, but first she'll have to deal with a dead body and a meddling ghost.

When a local theater troupe puts on a new play at the club, manager Avery Morgan is excited. This is just the sort of event that's destined to bring in potential new members. Okay, millionaire banker Bob Hanover has more bucks than talent and has used his position to grab the lead role, but that seems like a small price to pay...until Bob is found dead backstage.

Bob rubbed many people the wrong way, but would anyone want him dead? The short answer to that is: Who wouldn't want him dead? His long-suffereing wife had to put up with years of womanizing. The show's playwright has been tricked out of his one great idea by Bob, who claimed it as his own work. And Bob bankrupted one of the town's small businessmen. The choices are many and the time to find the killer is running short.

Avery is working overtime to keep the club open and find the killer. Fortunately, she has help with the latter task. Clemmie Bow was once a singer in the speakeasy in the club's basement. Now she's a ghost who's also a top-notch detective. Together Clemmie and Avery will find the killer—even if it kills one of them.

Lucy Ness is an established mystery author. She has written the League of Literary Ladies Mystery series and the Button Box Mystery series.

"[With] humor throughout the story that will have readers chuckling....Phantoms and Felonies is an entertaining tale with a flapper phantom, an assertive aunt, a dashing detective, a bumped off banker, and a cat’s meow chick."—The Avid Reader

"With an inexhaustible supply of potential suspects, this new series is a winner."—Akron Beacon Journal