The Shape of Night: A Novel (Paperback) 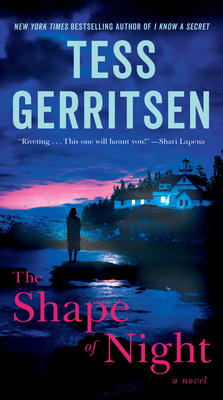 A woman trying to outrun her past is drawn to a coastal village in Maine—and to a string of unsolved murders—in this novel of romance and psychological suspense from New York Times bestselling author Tess Gerritsen.

After an unspeakable tragedy in Boston, Ava Collette flees to a remote village in Maine, where she rents an old house named Brodie’s Watch.

In that isolated seaside mansion, Ava finally feels at peace . . . until she glimpses the long-dead sea captain who still resides there.

Rumor has it that Captain Jeremiah Brodie has haunted the house for more than a century. One night, Ava confronts the apparition, who feels all too real, and who welcomes her into his world—and into his arms. Even as Ava questions her own sanity, she eagerly looks forward to the captain’s ghostly visits. But she soon learns that the house she loves comes with a terrible secret, a secret that those in the village don’t want to reveal: Every woman who has ever lived in Brodie’s Watch has also died there. Is the ghost of Captain Brodie responsible, or is a flesh-and-blood killer at work? A killer who is even now circling closer to Ava?

Praise for The Shape of Night

“Gerritsen is at her atmospheric best in this spine-tingling tale of a lone woman, an old house, and all the secrets everyone tries to hide.”—Lisa Gardner, #1 New York Times bestselling author

“Curl up in your favorite reading chair and let Tess Gerritsen whisk you away to a coastal town reminiscent of Daphne du Maurier’s best settings. You are in for a dark and sexy night, and you will be up very late with Tess’s twisted, haunting tale.”—Iris Johansen, #1 New York Times bestselling author

New York Times bestselling author Tess Gerritsen earned international acclaim for her first novel of suspense, Harvest (1996). She introduced Detective Jane Rizzoli in The Surgeon (2001) and Dr. Maura Isles in The Apprentice (2002) and has gone on to write numerous other titles in the celebrated Rizzoli & Isles series, most recently The Mephisto Club, The Keepsake, Ice Cold, The Silent Girl, Last to Die, Die Again, and I Know a Secret. Her latest standalone thrillers are Playing with Fire and The Shape of Night. A physician, Tess Gerritsen lives in Maine.

“This is one of Gerritsen’s best mysteries ever, with Ava Collette an unlikely heroine you’ll never easily forget. Pick up a copy—you might be left breathless and reeling, but you won’t be disappointed.”—Lisa Jackson, #1 New York Times bestselling author

“The Shape of Night is reading gold—thought-provoking, loaded with suspense, with an ending to knock your socks off.”—Catherine Coulter, #1 New York Times bestselling author

“This book reminds me why I love reading. Tess Gerritsen is a writer I look up to!”—J. R. Ward, #1 New York Times bestselling author

“A captivating and seductive tale exploring the dark embrace of grief and guilt, reminding us that nothing can haunt us as insidiously as our personal demons.”—Sylvia Day, #1 New York Times bestselling author

“This supernatural thriller from bestseller Gerritsen ranks with the best of her crime fiction. . . . This magnetic haunted house story will keep readers riveted from the very first page.”—Publishers Weekly (starred review)

“A spellbinding thriller. . . Gerritsen shifts a murder mystery into a Gothic thriller, replete with an unsteady widow's walk, secret alcove, strange smells, ominous sensations, and the ghost. The prologue echoes the dream of Manderley from Du Maurier’s Rebecca. . . . This riveting Gothic thriller explores the limits of love, guilt, and punishment.”—Kirkus Reviews

“Gerritsen creates an atmospheric scene with the mansion and the Maine coastline, and readers will almost feel the breeze and hear the waves crashing against the rocks. The main story of Ava, who may—or may not—be descending into madness, is compelling, and a clever twist or two steers the narrative in unexpected ways. . . . Another winner for Gerritsen.”—Associated Press

“Tess Gerritsen has had the ‘it’ factor for a long time, and she continues to show that no matter what she pens, it will rock!” —Suspense

“Gerritsen is a masterful plotter and her talents honed in decades of crime fiction translate perfectly to the new form, with a slow, satisfying drip of secrets and revelations.”—CrimeReads

“The Shape of Night expertly blends mystery with romance and speculative fiction. Better yet, in a novel featuring death and the afterlife, this book is as comforting as a cup of cocoa on a winter’s day or a roaring fire in the midst of an October rainstorm.”—New York Journal of Books

“Fans . . . will follow Gerritsen’s . . . story through the realms of mystery, paranormal romance, erotica, and psychological suspense to its compelling conclusion.” —Library Journal

“A quick read that will appeal to fans of the genre.”—Booklist

“A haunting romantic thriller with an irresistible Gothic twist, this is one of Gerritsen’s best.”
—BarnesandNoble.com